World’s most powerful particle accelerator comes back to life 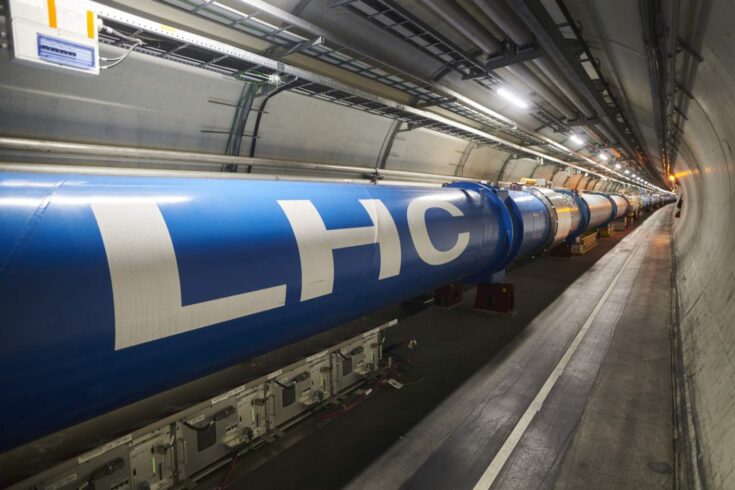 After three years of shutdown, the most powerful particle accelerator has been switched on today and will shortly begin another run of cutting-edge physics.

The Large Hadron Collider (LHC) at European Organization for Nuclear Research (CERN), on the French-Swiss border near Geneva, was switched off in 2018. This is to enable scientists and engineers from all over the world to make it even more powerful.

Now the machine has been turned back on, the global physics community celebrates.

The machines and facilities underwent major upgrades during the second long shutdown of CERN’s accelerator complex.

The LHC itself has undergone an extensive consolidation programme and will now operate at an even higher energy and, thanks to major improvements in the injector complex, it will deliver significantly more data to the upgraded LHC experiments

Teams across the world have helped the LHC reach record-breaking energy levels for its third physics run.

This new energy frontier will allow researchers to tackle ever more challenging questions about the laws of nature and our understanding of the building blocks of matter.

As part of the international effort, UK teams have led a series of vital work packages to improve the performance of each of the LHC’s four main instruments.

The UK’s contributions to the upgrade are worth more than £25 million, funded by the Science and Technology Facilities Council (STFC).

The UK continues to enjoy a strong and fruitful relationship with CERN. Our scientists and engineers have played pivotal roles in contributing to the major upgrades, paving the way for exciting UK-led research on the more powerful beams at the LHC.

It will never cease to impress me how our scientists and engineers, with their incredible skill and expertise, can continue to improve these cutting-edge facilities using ever more innovative technologies.

The global science community will now eagerly await the results from the new run, which will probe some of the recent hints of new physics seen at the LHC and elsewhere.

The LHC at CERN in Geneva is one of the world’s most important laboratories allowing scientists to understand the deepest questions of the atomic structure of our universe and the origins of human life.

The UK is proud to have been a founding partner of CERN and of the key role UK physicists and engineers have played in designing and building vital pieces of the LHC’s experiments.

Through our leading role in global projects of this scale the UK is building on a role as a global science superpower and helping retain the highest calibre of talented scientists in the UK.

For an overview of all the activities undertaken during Long Shutdown, please visit CERN’s background page.

The LHCb experiment studies the differences between matter and antimatter by investigating the decay of a type of particle called the “b quark”.

The collaboration has undergone a major technology upgrade to allow an increased collision rate of the LHC.

When the LHC restarts, the proton-proton collision rate at LHCb will be increased by a factor of five.
A novel fully software ‘trigger’ system will allow greater flexibility to select the collisions of interest and allow them to be stored for analysis.

The full detector will be a readout of 40 million times per second, with entirely new electronics readout and over 90% of the elements that detect the particles have been replaced.

The UK is the lead contributor, and this is the largest STFC particle physics project to be completed since the start of the LHC a decade ago.

The UK leads development of the new VELO, which is designed to act like a camera taking ‘pictures’ 40 million times per second to image particles produced in the LHCb experiment.

The beauty particles, that give the experiment its name, travel only a few millimetres before decaying. The detector is located only 5mm from the proton-proton collisions in order to identify these beauty particles.

One of the finished VELO modules assembled by The University of Manchester for the VELO detector on CERN’s LHCb experiment. Credit: Amy O’Connor, STFC

The RICH detectors, which determine particles’ identities, are equipped with new photon detectors, mechanics and mirrors.

Cones of light are emitted by travelling particles and are deflected and focussed onto an array of detectors. The new system will perform in an environment of much larger particle densities.

ALICE is a heavy-ion detector used to characterise a specific state of matter created under extreme temperature and energy density, quark-gluon plasma.

The ALICE-UK collaboration plays a leading role in the ALICE upgrade at the LHC. ALICE-UK has developed and built upgrades for the Central Trigger Processor (CTP) and the Inner Tracking System (ITS).

CERN’s ALICE detector has received a significant upgrade. STFC’s Daresbury Laboratory, in partnership with the University of Liverpool, has built ground-breaking new technology to form a part of a new ITS.

Silicon monolithic active pixel sensors are a key part of the ITS, the nearly 13 gigapixel camera capable of taking 50,000 pictures a second over 10 square metres.

This is the first time a large-scale particle tracking detector has been built entirely of silicon pixel sensors. Also, this is the first of their kind to be designed and built at Daresbury.

The University of Liverpool and Daresbury Laboratory are highly experienced in research and development, design and construction of silicon detectors.

They have been given the responsibility of designing, building and commissioning the outer layers of the outer barrel of the ITS upgrade, in collaboration with:

These projects were funded by STFC over a five-year period from 2015 to 2019 and are fundamental to the ALICE upgrade. Funding continued to be provided by STFC to complete commissioning and start of operation of the detector, via the nuclear physics consolidated grants.

The new CTP has been designed with the capability of managing a system of detectors with very different properties and can receive inputs and deliver trigger signals every bunch crossing (25 nanoseconds).

ATLAS is a general-purpose detector designed to record high-energy particle collisions of the LHC.

The calorimeter upgrade’s aim is to keep a low trigger rate, thanks to the background rejection, and to keep low thresholds, thanks to the higher geometrical resolution. UK groups have led these activities.

The UK group leads the placement of new data readout boards along with new multithreaded software to maximise the efficiency and flexibility of current data-taking.

The UK group leads the creation of innovative new data-taking streams which will allow novel analyses to take place.

Construction of pixel and strip detectors is currently underway.

In addition, the High Level Trigger and Data Acquisition will also undergo many upgrades for phase 2. It will aim at trigger granularity that will enable the management of a much higher rate of data with finer grained information.

The CMS detector is a general-purpose detector built around a huge solenoid magnet used to bend the paths of particles from collisions in the LHC.

Upgrades are required to cope with the anticipated increase in the beam luminosity of the LHC.

Large parts of the detector will be replaced including areas that the UK is strongly engaged in, namely:

The new systems are all designed to cope with the harsh environment of the High Luminosity LHC.

Learn more about the UK’s involvement in the LHC.