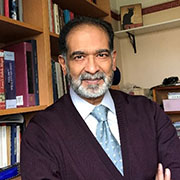 Chakravarthi Ram-Prasad is a Fellow of the British Academy, and Distinguished Professor of Comparative Religion and Philosophy at Lancaster University.

He is currently co-chair of Lancaster University’s Race Equality Charter process and was formerly Associate Dean for Research.

He sits on higher education policy, early career network, and the diversity committees at the British Academy.

He is the author of over 50 papers and seven books. His research and teaching cover a wide range of topics in Indian and comparative philosophy, especially metaphysics, epistemology, theories of consciousness, and aesthetics; global religious traditions, focusing on Hinduism and Buddhism; politics, conflict and identity; and International Relations and non-western philosophical traditions.

His 2014 Human Self, Divine Self (Bloomsbury) won the Best Book 2010 to 2014 award of the Society for Hindu-Christian Studies.

He is a Senior Fellow of the Dalai Lama’s Mind-Life Institute and advised the former Archbishop of Canterbury on Hindu-Christian relations.

He is on the Advisory Board of the Oxford Centre for Hindu Studies, and on the editorial board of various journals of comparative religion and philosophy. He currently serves on the Advisory Panel of the Leverhulme Trust.