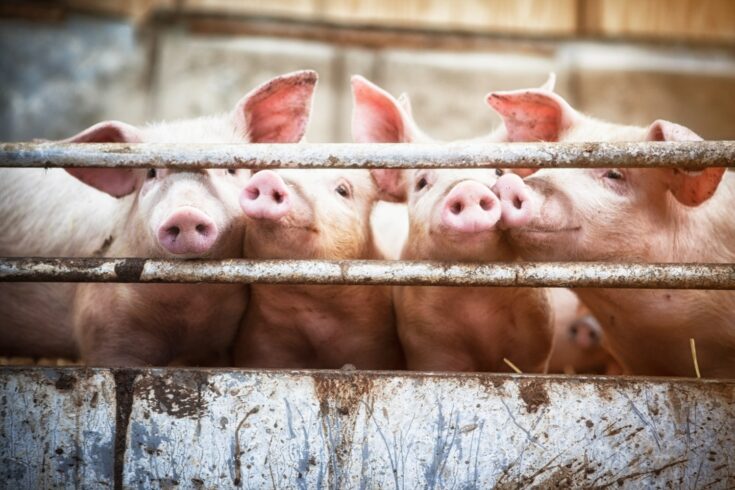 Technology that spots and interprets small changes in pigs’ behaviour can help keep them healthy and boost farm productivity.

How to keep a healthy herd

The UK is home to around five million pigs, spread across 10,000 farms.

Ensuring high levels of health is not just essential to animal welfare. It is also vital to the success of the £1.5 billion pork industry. Sick pigs add to farm costs by increasing vet bills, reducing productivity, and eroding profitability, especially where illness results in premature death.

The key is early detection of disease, enabling prompt intervention to tackle illness before it becomes more severe or spreads to other pigs. Sometimes, subtle changes in behaviour (such as how a pig feeds or interacts with others) can be the first sign that something is wrong.

Traditionally, spotting such signs has relied on human observation, either in person or via video footage. Time-consuming and tedious, this method has obvious limitations in terms of practicality and accuracy.

An efficient early detection system, adaptable to specific conditions in different farm settings, would hugely benefit the pork industry both in the UK and worldwide.

An interdisciplinary team at Newcastle University came up with an innovative solution. They harnessed hardware and software advances in the fast-moving field of artificial intelligence (AI) to develop an automated system for monitoring and analysing pig behaviour.

The work was supported by Biotechnology and Biological Sciences Research Council (BBSRC) and Innovate UK via the Agri-Tech Catalyst, plus collaborations with industry.

The team of biological scientists, computer scientists and electronic engineers applied capabilities in areas such as:

The key outputs were algorithms capable of assessing footage of pigs captured by standard, low-cost video cameras. The algorithms pinpointed and quantified changes in a range of pig behaviours and then predicted whether symptoms of digestive or respiratory disease might appear in the following days.

Successful testing of the algorithms took place in a controlled environment where an infection was known to be present.

Our system identified abnormal drinking and other behaviours quickly and accurately. It also coped very well with challenges such as variations in lighting.

The machine learning component enabled it to keep getting better at spotting and differentiating behaviours and using this information to predict the onset of sickness symptoms.

From idea to product

This proof-of-concept project, which ran from 2014 to 2018, provided the springboard for further development. With EU support and combining expertise at Newcastle and Queen’s, the system has now been tested in situations where it was not known whether an infection was present.

As well as monitoring several behaviours in parallel, it has proved possible to identify changes in drinking behaviour, for instance, up to eight days before symptoms of infectious disease appear. The system can also link specific changes in behaviour with specific illnesses.

On-farm tests will evaluate its ability to work in different farm settings.

Our ultimate goal is to develop a commercial early warning system that can be incorporated into existing tools used by the pork industry.

It will need to provide confidence that it can operate effectively in a wide range of real-world farm environments. We’re exploring the possibilities with our commercial partners right now.

By enabling prompt action to treat and isolate infected pigs, earlier detection of disease has minimised discomfort and distress as well as the chances of illness spreading through a herd.

Animal welfare is a major societal concern. So the ability to deliver improvements in pig health and welfare could also boost public trust in pig farming and translate into valuable commercial benefits across the food chain.

This breakthrough in pig management underlines the enormous scope to harness cutting-edge AI and other ‘smart’ technologies to tackle agricultural challenges. The benefits of these technologies will also increasingly be felt in other key areas such as climate change and environmental protection.

Researchers involved in this research have acquired and refined valuable skills in biological and computer sciences; the interdisciplinary environment has been hugely important in extending horizons and ensuring skills’ transferability.

For instance, a post-doctoral research assistant specialising in protection against disease went on to join a major AI company to work on new security technology based on hand palm recognition. By fostering the development of world-class expertise, BBSRC and other UK Research and Innovation investments benefit academia, industry and wider society.

AI-based health and welfare monitoring systems are being developed for other types of livestock too, extending the benefits across the farming sector.

Farmers invest a lot of time and resources into rearing animals, which are wasted when any animal is lost due to disease. By intervening earlier, animals are kept healthier, and losses reduced. That means resources are used more efficiently and reduces the carbon footprint.

The ability of animal diseases to ‘jump species’ and potentially enter the human population is well known. Enhanced management and control of diseases affecting farm livestock can make a valuable contribution to reducing the threat from such diseases.

Additionally, by identifying and treating infections early, vets can reduce their use of antibiotics, which helps reduce the risk of antimicrobial resistance developing within the herd.