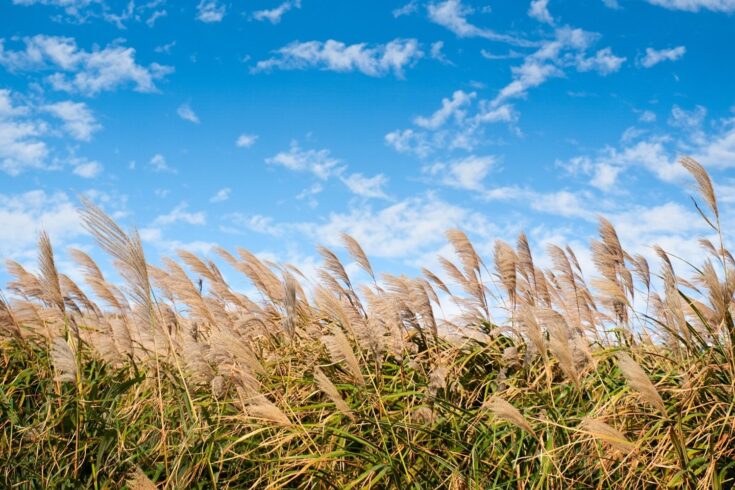 This grass species first attracted attention as a possible energy source, but new research shows it could cut carbon emissions in several ways.

Miscanthus has been of interest for some time. Researchers looked at it as a source of energy. Policymakers thought of it as a way to protect economies against oil price shocks. But the growing focus on climate change led researchers to investigate how it can help cut carbon emissions.

In the UK, the Institute of Biological, Environmental and Rural Sciences (IBERS) has played an important role in advancing research on Miscanthus over the past 15 years. This work has been supported by funding from the Biotechnology and Biological Sciences Research Council (BBSRC).

IBERS insights are contributing to breakthroughs such as sequencing the crop’s genome for the first time. This may lead to Miscanthus emerging sooner as a significant means of reducing carbon emissions.

“It’s an unusual crop,” said Professor Iain Donnison, Head of IBERS at Aberystwyth University. “It can quickly produce, in multiple environments, lots of biomass for burning in power stations. For the UK, its excellent tolerance of cold temperatures and highly efficient photosynthesis and water use make it a great option.”

Video credit: BBSRC
On-screen captions and an autogenerated transcript are available on YouTube.

After early work in the 1990s, the UK pushed to assess the energy potential of the Miscanthus crop. Together with other sustainable biomass it was thought to be capable of meeting 5% to 10% of UK energy needs, and boosting the drive to decarbonise worldwide.

The research would have many strands and the long pedigree of IBERS in grass science, not least its understanding of the importance of plant genetics, made it a natural leader. It secured support from:

Biological aspects remained central and IBERS has explored them vigorously, with long-term and shorter-term support from BBSRC since the mid 2000s.

“The big question was whether Miscanthus could be grown at industrial scale in the UK,” said Professor Donnison. “But accommodating changing priorities, such as thoroughly understanding the ecological impacts, has been key too.”

Breeding Miscanthus for the UK climate

Everything would hang on the ability to breed varieties which would thrive in UK conditions, especially on low-quality land less suited to food production. IBERS experts regularly visited South East Asia, working with local partners to collect samples in accordance with strict ethical standards, enabling plants to be grown and hybrids developed in the UK.

IBERS’ plant quarantine facilities meant they could bring back root portions as well as seeds. This meant the plants they grew had exactly the same genetics as their parents and the same ability to produce lots of biomass.

At the same time, IBERS developed a scientific understanding of different Miscanthus varieties and the computer modelling capabilities to predict their performance.

Also important was collaboration with UK companies and organisations. BBSRC partnering grants enabled the development of links with organisations and partners around the world. These relationships expanded beyond researchers to those in the field, encouraging the sharing of experiment protocols, such as weed control and building skills across the teams.

With the research making good progress on accelerating domestication, enhancing resilience to drought and waterlogging, and addressing yield issues, IBERS could focus attention on specific varieties and begin cross-breeding.

The IBERS research led to the ability to produce plants from seeds, which keeps costs down and increases crop diversity. From a carbon reduction perspective, the ability to grow Miscanthus from seeds, which are quicker to plant and lighter to transport than root portions, reduces energy inputs too. In 2019, licences were signed for the most promising hybrids, which have also been planted in commercial trials across Europe.

The announcement in 2020 that the complex genome of Miscanthus had been sequenced for the first time was a huge leap forward. As part of the global team behind it, IBERS made an important contribution founded in its long track record in forage grasses.

Professor Donnison said “Cracking the genome sequence has huge implications. It’s a massive boost to our ability to breed varieties for specific climates, environments and uses.”

Genome sequencing paves the way for customising Miscanthus through follow-up research, for example enabling prediction of crop traits from seedlings. It also will help improve the inherent versatility of Miscanthus, including breeding varieties designed to maximise the different amount of carbon each variety fixes in the surrounding soil. Cross-checking genome sequencing data with long-term field experiments will also help boost carbon-fixing performance.

There is huge potential to help the UK meet its net-zero carbon commitment for 2050 through bioenergy or by locking carbon in the soil.

But interest is also focused on using Miscanthus to replace chemicals and materials derived from fossil fuels or produced through energy-intensive processes. For example, Aberystwyth’s Research and Innovation Campus (AberInnovation), funded by BBSRC and the Welsh Government, is biorefining plant-derived sugars into transport fuels and chemical building blocks for green manufacturing.

Work is in progress to explore other carbon-cutting dividends, such as incorporating Miscanthus fibres into car body parts to make them lighter and boost fuel efficiency.

“It used to be considered a carbon-neutral fuel,” explained Professor Donnison. “But with net zero the objective, attention is switching to capturing and storing the carbon released, making it a negative-emissions option.”

“The long-term nature of the experiments we can undertake in collaboration with other research council institutes like the UK Centre for Ecology and Hydrology (UKCEH) is key to a deeper understanding of issues such as different varieties’ energy value and soil-carbon capabilities.”

Professor Donnison said: “This field of research could help meet some big challenges in addition to climate change, such as the need to reconnect rural and urban economies – for instance, by growing crops for construction materials to help meet demands for low-carbon and sustainable housing.”

Read the Climate Change Committee’s report on Biomass in a low-carbon economy.

Watch videos about the biomass sector on the Biomass Biorefinery Network website.