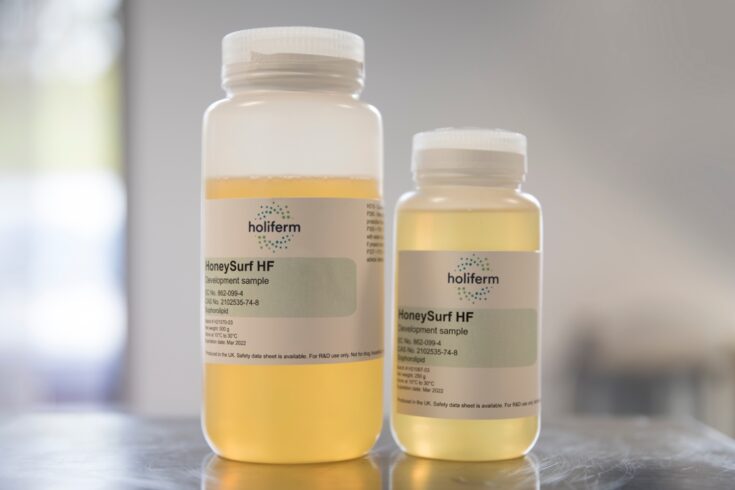 A surface-active ingredient, or ‘surfactant’, reduces surface tension in liquids and is a key ingredient in cleaning, personal care and many other products. Surfactants are often made from crude oil, but there are greener options. Sophorolipid biosurfactants, made from sugars and vegetable oils, offer a biodegradable, low-carbon, skin-friendly alternative.

University of Manchester spinout company Holiferm developed a new method for making a sophorolipid biosurfactant that is both biodegradable and has a low ecological impact, opening pathways to major global markets.

James says: “Because of their clear environmental advantages, there’s a big potential market for sophorolipid biosurfactants. What was needed was a cheaper way of producing them. That’s the challenge we set out to tackle.”

Their starting point was the tried-and-tested technique of yeast fermentation. To avoid the biosurfactant accumulating and clogging up the system, they came up with a technique that used gravity to separate out the biosurfactant as it was produced. As well as using less energy than existing methods, this doubled production rates to around five grams per litre per hour in a two litre bioreactor.

Scaling up the prototype

The pair had developed a prototype, but they had to demonstrate that it could be scaled up and replicated beyond the lab. “We needed the right help and support, and the BBSRC NIBB provided the perfect vehicle for this,” says James.

The NIBB helped the researchers to develop industry contacts. Ben and James’s first application was to BioProNET, which provided a Business Interaction Voucher, enabling them to work with an industrial partner.

Proof-of-concept funding from FoodWasteNet paved the way for further technical refinement plus testing of a range of raw materials in collaboration with a biosurfactant producer.

With a British Council travel bursary in place, Ben travelled to a production site in India where the new process was demonstrated at a 150-litre scale. He also explored different technical possibilities at the Indian Institute of Technology Guwahati.

A travel award from another NIBB, Plants to Products (P2P), paved the way for Ben to undertake similar explorations at the Netherlands’ Technical University of Delft.

In May 2018, James and Ben formed spinout company Holiferm. “The survival of Holiferm depended upon our pitches to investors,” James emphasises. “The fact we’d already collaborated widely and built a network of contacts made our business case much more compelling.”

Holiferm has a rapidly growing workforce, with 14 full-time equivalent jobs (and rising). The company has a research and development lab at Manchester Science Park and a 600 litre, 20 to 25 tonnes a year pilot plant on the brink of being commissioned at SciTech Daresbury.

The company is set to reach industrial-scale production capacity in 2022, providing a significant, environmentally friendly boost to the decarbonisation of the chemicals sector.

Recent investments from Rhapsody Venture Partners, ICOS Capital and the Clean Growth Fund will help Holiferm to open a new commercial production plant. Planned to open in Wallasey, Merseyside, it will employ 30 people and produce more than 1,000 tonnes of biosurfactants a year for global supply. The new investments will also support the launch of new biosurfactant products and the company’s research and development work with chemical company BASF.

In eight years, James and Ben have learned vast amounts about establishing a business and what that means in terms of making contacts and connections. “The importance of the BBSRC NIBB support in helping us do this – and ultimately contribute to UK competitiveness and clean growth – can’t be overstated,” says James.

Details of Holiferm projects supported by Innovate UK grants on Gateway to Research: