Where livestock agriculture fits in a net-zero future 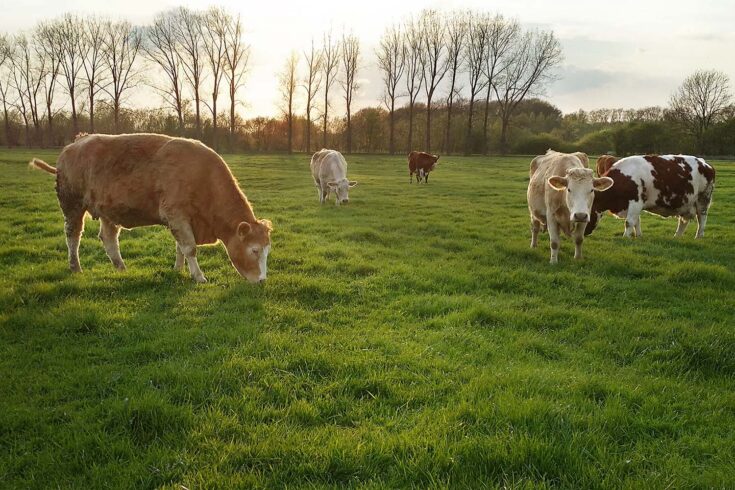 Research into the gut microbiome of cows and high-tech farms is demonstrating ways to reduce emissions from livestock farming.

Agriculture remains the fifth-highest sector for greenhouse gas emissions, producing 11% of the UK’s total emissions in 2020.

Activities such as the use of inorganic fertilisers, the use of fossil fuels to power farm machinery the production of animal feed, and the use of manure are all significant greenhouse gas emitters. However, the majority of the UK’s agricultural emissions is methane arising from livestock.

Ruminant livestock (animals such as cows and sheep), have digestive systems that naturally produce methane. The challenge is how emissions from livestock farming can be minimised whilst also maintaining global food and nutrition security.

Meat remains an important source of protein for many people around the world. In 2018 to 2019, the average UK adult consumed per day:

The UK’s climate and a large proportion of its soils are more suited to grassland than arable cropland.

Livestock farming is also a way of producing human-edible food from human-inedible crop residues and waste from grazing lands. The Food and Agriculture Organization estimates that 86% of livestock feed is inedible for humans.

Land use decision making needs to ensure that practices are adapted to local environments, climates, and cultures.

Previous research has highlighted where the most promising ideas lie to reduce emissions from ruminant farming. The research community is targeting cost-effective methods, including:

Microbiome research at the Roslin Institute

The team investigated how the balance of different microorganisms in cows related to methane emissions. They focused on the rumen, the first stomach in cattle and where most carbohydrates are broken down.

The project used specialised gas chambers to measure the methane emissions of individual cows, comparing that data to the levels of different species of bacteria in the rumen.

Each farm can be managed under different conditions and management, generating data on factors such as nutrient transfer efficiency and carbon footprint.

Dr Taro Takahashi, Senior Lecturer in Sustainable Livestock Systems and Food Security at the University of Bristol on a joint appointment with Rothamsted, says:

Soils in the UK, including those in the south-west where we are located, are often clay-heavy and prone to waterlogging. Under this condition, one of the very few crops you can reliably grow every year is grass.

That really limits options for many farmers in this region. One of the farm-scale experiments we’re running at North Wyke is looking at a completely plant-based farming system.

We want to see whether a zero livestock system in the south-west is feasible, and that encompasses food production, environmental and ecological impacts, farmers’ livelihoods and the local economy.

A video overview of NWFP and how it contributes to agricultural sustainability and climate change research.

Lowering emissions by understanding the rumen

Microbiome research at Roslin demonstrated that it’s the methanogenic archaea, microorganisms in the gut, that produce methane as part of their metabolism.

There is a direct correlation between the abundance of the archaea in the rumen and the amount of methane that an animal produces.

They also showed that a cow’s genetics can directly affect the environment within the rumen, making it more or less hospitable for different species of microorganism, including the methanogenic archaea.

Cattle breeders can now use microbiome data in their breeding programmes to select for lower emitting animals.

The results have shown that if farmers use these data in their breeding goals, along with feed additives that reduce methane emissions, we will see an immediate fall in methane emissions. This can be compounded year-on-year through breeding for lower emissions.

The team also assembled a huge catalogue of novel rumen microbial genomes, which will underpin ruminant research far into the future.

NWFP has been gathering a wide range of data since 2011, which has been made freely available to researchers. Dozens of sustainable agriculture research projects have made use of this resource, including over 50 published research papers.

One study used the data to show that models had been underestimating the emissions from cows. The authors also noted that there was variation in emissions between cows, highlighting that simply breeding from specific ‘low emission’ cows could decrease emissions rapidly.

Further research at NWFP has found white clover forage mixes can help reduce the carbon footprint of cattle and sheep farms due to less need for nitrogen fertilisers.

Legumes, plants such as beans, peas, alfalfa, and clover, play an important role in sustainable agriculture due to the nitrogen-fixing bacteria in legume root nodules.

Data from the platform was used to demonstrate how multispecies forage with legumes reduced greenhouse gas emissions in comparison to using mineral nitrogen fertiliser, with comparable or greater forage yields.

The co-funded research was by the Natural Environment Research Council (NERC), led by the University of Reading and Rothamsted Research.

Other benefits were also seen, such as:

Professor Mark Eisler, Chair in Global Farm Animal Health at the University of Bristol, emphasises the role North Wyke has played globally. The platform was also one of three others that inspired the multidisciplinary Global Farm Platform.

Starting in 2014, it has subsequently grown to an international network of 16 research farms in five continents covering a wide variety of social, agricultural, and climatic conditions, plus various production systems.

The group are currently working collaboratively towards achieving eight key steps considered central to livestock sustainability. Both Taro and Mark agree that to realise further reductions in emissions, international collaboration is required.

We might find that there are more nuanced systems of agriculture that take into consideration a wider range of sustainability parameters.

And if that’s combined with more sensible levels of consumption and a more equitable global distribution of food, we could get a better balance in what we do.

Mick and the team also highlight the number of animals lost each year to diseases that never enter the food chain. Yet they still have a climate impact because of the resources used, plus the methane or nitrogen produced.

With better vaccines, drugs or disease resistance, there is an immediate and massive impact.

Livestock tend to be quite variable in their productivity within and between herds. This variability represents wastage.

By addressing issues of nutrition, genetics, and health we can reduce the gap between the best and the worst.

Keeping animals healthy, using smart farming approaches for animal nutrition and optimising genetics will all help reduce this variability and improve the efficiency and sustainability of production.