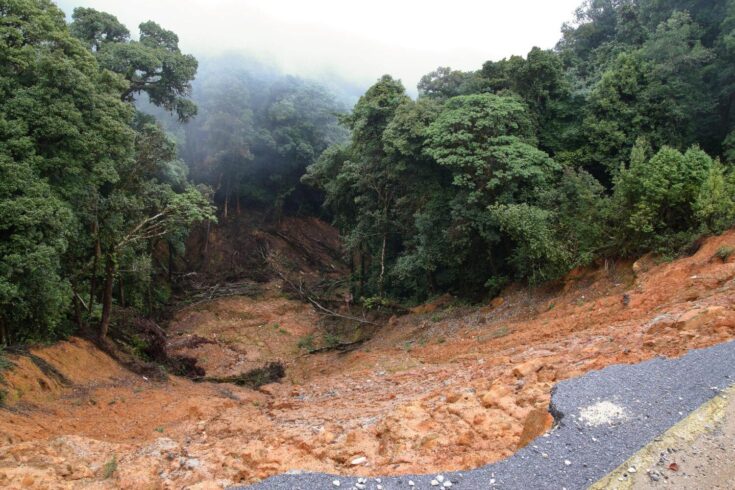 A landslide early warning system has been developed that listens for noises created by soil movements, and sends an alert that a landslide is imminent.

Landslides happen around the world and often have disastrous consequences, costing thousands of lives and damaging critical infrastructure. An early warning system developed by engineers from Loughborough University senses acoustic emissions created by underground soil movements, and alerts those above ground that a landslide is about to happen.

Dr Alister Smith worked on the project, led by Professor Neil Dixon, through two EPSRC fellowships. The aim of their research was to benefit low- and middle-income countries. Traditional landslide early warning systems are extremely expensive or may have technical limitations, so the first versions of the system were designed to be affordable and easy to use and maintain.

Slope ALARMS is an early warning system that was developed with the British Geological Survey, and is used to monitor critical infrastructure. Community Slope SAFE, produced by Professors Dixon and Smith in collaboration with Datalink Electronics, is a low-cost version of Slope ALARMS, operated by local people in communities at risk of landslides. Community Slope is aimed at low- and middle-income countries, so needed to be affordable and easy to use and maintain.

Community Slope SAFE also provides information for geotechnical engineers to understand the nature of potential landslides and help predict their behaviour, and is useful for infrastructure owners and operators around the world.

In landslide risk zones, a waveguide – consisting of a steel tube with a sensor inside a protective cover – is driven into the slope. If the slope moves, the soil in and around the tube generates high-frequency noises known as acoustic emissions. The sensor ‘hears’ the emissions and converts the mechanical energy into an electrical signal, and triggers a warning if a certain threshold is exceeded. The system was designed to exclude low-frequency noise from sources like transport and agriculture to avoid false alarms.

Community Slope SAFE has been trialled in several locations. In 2017 the system was installed in a hilltop area of Kuala Lumpur with a history of slope failures. In 2018, 20 young volunteers were recruited and trained to install, operate and maintain the system in Myanmar’s Chin state, where landscapes had caused loss of life and damage to infrastructure.

With colleagues from Loughborough University, Dr Smith is now applying the acoustic emissions approach to scenarios such as the impact of ground movements on critical infrastructure like buried pipes and dams. He is convinced that it could transform the way geotechnical assets are monitored.

The research has been commercialised by Canadian firm RST Instruments, which has produced the Geo Acoustic Aware Slope Monitoring System.