Seeing is believing at the X-ray Materials Scattering facility 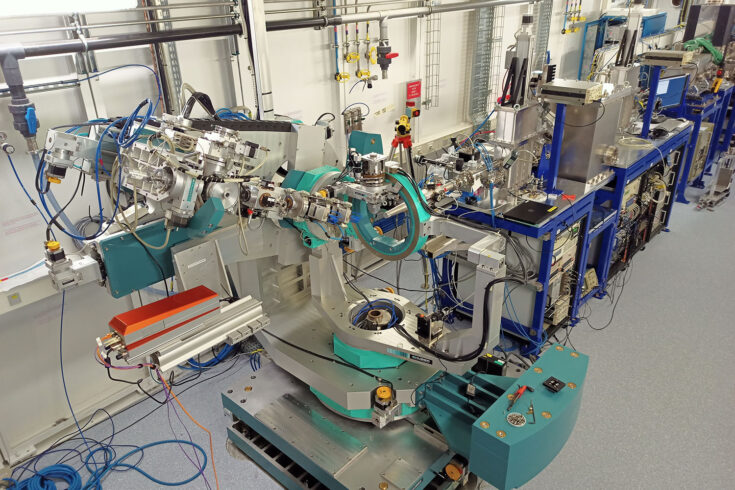 From tooth fillings to the Mary Rose, the UK’s X-ray Materials Scattering (XMaS) user facility allows scientists to explore the secrets of materials.

2022 marks the 25th anniversary of the operation of the UK’s XMaS user facility at the European Synchrotron Research Facility (ESRF) in Grenoble. It has been directed for all that time from Warwick and Liverpool University Physics Departments.

XMaS came about when the first of the world’s ultra-bright synchrotrons was being designed and built on the bank of the Isere River in Grenoble in the early 1990s.

Powerful magnets bend the beam of electrons around the enormous storage ring of the synchrotron and, as the path of the electrons is bent at these magnets, they release radiation. That radiation is captured and focussed into the experimental stations positioned around the synchrotron.

The ESRF’s bending magnets were originally designed simply to steer the electron beam around the synchrotron ring between the newly developed insertion devices.

Researchers soon realised that the bending magnets themselves were potent sources of synchrotron radiation which could be exploited for additional beamlines. The UK took advantage; Malcolm Cooper, at Warwick, and Bill Stirling, first at Keele and then Liverpool, generated a viable blueprint.

When it opened for users in the autumn of 1997 it was never envisaged that XMaS might be still operational 25 years later.

Thanks to support by the Engineering and Physical Sciences Research Council (EPSRC), XMaS has undergone a continuous programme of improvement and upgrades over the years. This has included the development of sophisticated sample environments in commercial partnership with international companies as well as more general advances in X-ray metrologies.

Recently a major refurbishment was necessitated by the upgrade of the ESRF ring. XMaS is now a virtually new beamline which is fully integrated into UK research infrastructure and fit for purpose for many years to come. XMaS was one of the first EPSRC flagship National Research Facilities (NRF).

The NRF now provides the UK materials science community with access to a state-of-the-art X-ray facility and facilitates training for early career scientists in advanced scientific methodologies. It is also a key access point to the ESRF supporting users to develop international collaborations in partnership both with academic institutions and industry.

Catalysts, teeth and the Mary Rose

The science case for the beamline was initially devoted to the study of magnetic materials, which were in vogue in the 1990s (the acronym XMaS originally stood for X-ray Magnetic Scattering). The facility has since evolved to encompass a broader materials programme, including polymers, liquid crystals, catalysts, and more, using a variety of techniques.

The facility has 4 permanent staff plus 2 postdocs on site, who carry out their own research as well as helping visiting research groups run a diverse range of experiments. Following the retirement of Malcolm Cooper in 2010, XMaS has been led from Warwick by Tom Hase and Chris Lucas at Liverpool.

Alongside the expected studies of strategically important materials XMaS has hosted more unusual scientific experiments. For example, studies of the strains induced in teeth by fillings, plus investigations of dental enamel aimed at developing new re-mineralisation treatments that could allow patients to retain their teeth until later in life.

Several precious cultural heritage artefacts have also featured on the XMaS beamline. For instance, scientists used Xmas to study the corrosion and composition of mail body armour links retrieved from Henry VIII’s warship, the Mary Rose. The research showed that the simple conservation treatment of soaking in distilled water 40 years ago has been entirely successful.

In recent years the project has also supported outreach activities including the annual ‘XMaS experience’ for year 12 schoolgirls studying the physical sciences. This activity, which has a strong focus on highlighting careers in science and providing opportunities to meet role models involves a competition focused on exploring the work and life of an inspirational female scientist.

The 16 winning entrants are then taken to ESRF to see XMaS and to participate in the ESRF’s Synchrotron@Schools outreach programme. Participants also have the opportunity to talk to female scientists who have made successful careers in X-ray science.

Overall XMaS has been a UK research success story thanks to the strong support of EPSRC and the activity of the user community. This national research facility ensures UK scientists can access a world-leading synchrotron beamline in a vibrant European facility for many years to come.