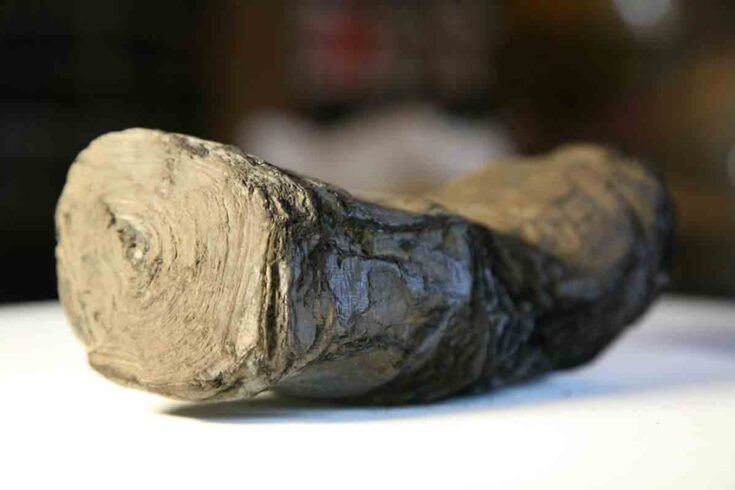 A team of researchers, using beams of x-ray light, hope to reveal the writing locked away within 2,000-year-old charred papyri from Herculaneum.

For more than 200 years scholars have been attempting to read what remains of heavily charred scrolls rescued from the library of a luxurious villa destroyed during the eruption of Mount Vesuvius in 79 AD.

At that time, Herculaneum’s buildings were buried under layers of ash, and the hot gases turned the library into an oven in which the abandoned scrolls were flash-heated and transformed into fragile rolls of carbonised papyrus resembling lumps of coal or burned logs.

Excavations of the site started in 1709 but were abandoned. In 1980 around 1,800 scrolls were discovered, finding homes in the Biblioteca Nazionale in Naples, the Institut de France in Paris, the British Library in London, and Oxford’s Bodleian Library.

The question for scientists now is how to read something that is illegible, and locked away in a complex matrix of tightly rolled, blackened and compacted material that is too fragile to touch, with ink that quickly fades once exposed to air.

Video credit: STFC.
On-screen captions and an autogenerated transcript is available on YouTube.

A team of researchers from the University of Kentucky, working at the UK synchrotron Diamond Light Source research facility, are using x-rays 100 billion times brighter than the sun to reveal the ancient wisdom contained in the papyri.

The first stage uses the Diamond Light Source synchrotron to probe the scrolls with beams of x-ray light. These very bright x-rays can penetrate the scrolls and map their internal structure in a completely non-invasive and non-destructive way. The x-rays pass through the scrolls and are detected on the other side to create a series of two-dimensional images that can then be stitched together to create a three-dimensional model of the scroll.

The second stage involves the fragments of papyrus that are the result of previous efforts to physically unroll the papyri. These fragments, which have writing on them that is visible to the naked eye, are photographed, scanned and the results fed into computers.

Complex computer algorithms (machine learning) are used to teach the computer to recognise the subtle structural differences between the inked and blackened areas (such as differences in the structure of papyrus fibres).

After the computer has been trained on these fragments, the idea is to apply it to the data from the intact scrolls collected at Diamond Light Source and, hopefully, reveal the text hidden within.

Professor Seales and his team proved in 2015 that the technique works on metallic-based inks, when they were able to read the text hidden within an ancient Hebrew text. This was the first time this had been achieved with an ancient scroll without physically opening it.

If the same can be done for carbon-based inks, an entire library of lost prose, poetry, philosophy and history might suddenly be opened up to the modern world. The knowledge the ancient librarians in doomed Herculaneum once tried to preserve might finally be readable once more.

Professor Seales is optimistic: “By digitally restoring and reading these texts, which are arguably the most challenging and prestigious to decipher, we will forge a pathway for revealing any type of ink on any type of substrate in any type of damaged cultural artefact.”

Read about unravelling the scrolls on the Diamond Light Source website.