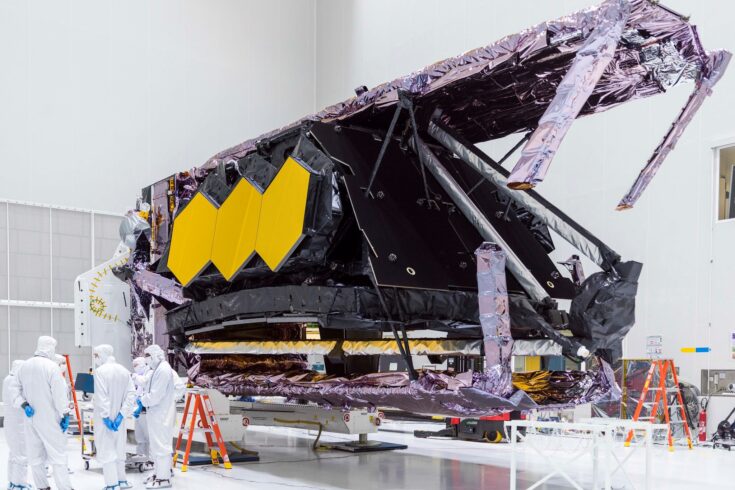 As the JWST launch date approaches, I’m in Baltimore working with an international team of scientists and engineers as we make our final preparations.

I flew out to America a few weeks ago and I’ll be based in Baltimore for the next eight months. I’m leading the commissioning team for mid-infrared instrument (MIRI), one of the four major scientific components on the JWST.

The team comprises 50 scientists and engineers drawn from institutes across Europe and America, close colleagues tasked with getting MIRI working and ready for its science mission.

JWST is the largest, most powerful observatory to have ever been launched into space, so as you can imagine, it’s an incredibly complex piece of equipment. MIRI can see at longer wavelengths than the other instruments on JWST, so it will be possible to penetrate the dense dust clouds that surround newly forming stars and planets.

It can detect the red-shifted light from the most distant and ancient galaxies, looking back billions of years in time and study the very beginnings of the universe.

After the launch, the JWST observatory, launched by an Ariane 5 rocket, will take roughly a month to reach its new home in orbit one million miles from Earth. It will be in a position astronomers refer to as the second Lagrangian point, or more commonly L2.

As commissioning lead, my role has been to ensure that the instrument we’ve built meets the needs and aspirations of astronomers and scientists. We delivered MIRI to NASA in 2012. But our involvement didn’t stop there. Since 2012, MIRI has been getting built into bigger and bigger subsystems within the observatory, so we’ve been carrying out rigorous testing at every stage. 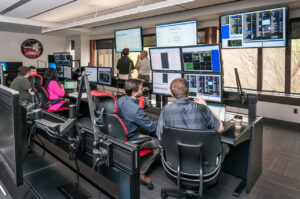 For example, in 2017 in Houston, we built up the entire observatory, all the instruments and the telescope, in a huge vacuum chamber. It was then cooled down to its operating temperature in space, which is around 40 kelvin (approximately -230°c), before we ran end to end tests. This was to check the instruments could be aligned and cope with the rigours of space.

Now we have moved to a new stage. We used to be called the test team, now we are the commissioning team.

For the first six months of the mission, we will be responsible for MIRI. Once the observatory has been aligned and cooled down, we will run tests to verify that MIRI is working as we expect and is capable of performing its science mission. 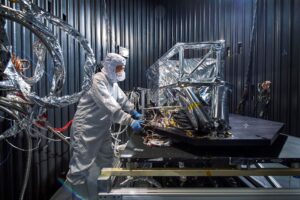 The Space Telescope Science Institute building in Baltimore has been adapted to be dedicated to JWST commissioning, with multiple security check points to get through to get into the mission operation centre itself.

And unsurprisingly, we’re all being super cautious about COVID-19 while we’re here. We’re following a number of different processes and procedures to stay COVID-19 safe, we even have proximity sensors in place. If you get within two metres of another colleague, the sensors flash red to alert you to increase your social distance.

Some of you might already know that when Hubble first launched in 1990, it had a pretty serious optical problem. Because it was relatively close to Earth (340 miles), astronauts could reach and repair the telescope. It was fixed by replacing some of the optics, like fitting a pair of space spectacles to sort its vision out.

Unfortunately, we don’t have that luxury with JWST because it’s going out to L2. That means it’ll be a million miles away from Earth and NASA doesn’t have the ability to fix any problems. Therefore, the testing and rehearsal process is critical to the overall success of the mission.

Every minute of that first six months post-launch has been planned and pared down for efficiency. However, we’re constantly looking for new ways to fine tune our processes so that we can make things even more efficient. Reviewing every detail to try to anticipate the unexpected, and think of how we would deal with it.

Needless to say, we’ve carried out a significant number of rehearsals in preparation for the launch of the JWST, some of which we did remotely due to the pandemic. I could mirror the functionality of the MIRI console at home, which is incredible really. However, now we are coming up for launch, this next stage of the rehearsals is all happening face-to-face.

It’s easy to be dazzled by the technology used throughout the JWST, but a really strong team is essential to making it all work.

I’m leading a team of approximately 50 people. The team will be responsible for staffing the MIRI instrument console 24 hours a day for the first 180 days, through three eight-hour shifts per day, with two people per shift.

But we’re just one of multiple teams working on JWST. There will be about 100 people in the mission operation centre at any one time. Although everyone has their own specialism, success very much relies on us all working together as one well-oiled machine.

The MIRI team is an incredibly close-knit team now. It’s so important that we all know what we’re doing, we’re all following the same script and we’re all working to the same schedule. And if something goes wrong, we all know exactly who to call and what our role is should an anomaly situation occur.

As we approach launch day, there is of course some degree of nervousness and excitement, probably in equal measure. There’s a feeling of great responsibility because everyone working on MIRI and JWST is such a professional and also incredibly focused on getting through the rehearsals and checks that need to happen before launch.

The value of collaboration

JWST really is an amazing collaborative effort, and on a truly international scale. It’s a brilliant demonstration of how you can get thousands of people with different cultural backgrounds working together to build something truly astonishing. It’s an incredible achievement and I personally can’t wait to see the results it brings.

Find out more about this remarkable telescope and the science mission.