New and improved LHC begins the search for new physics 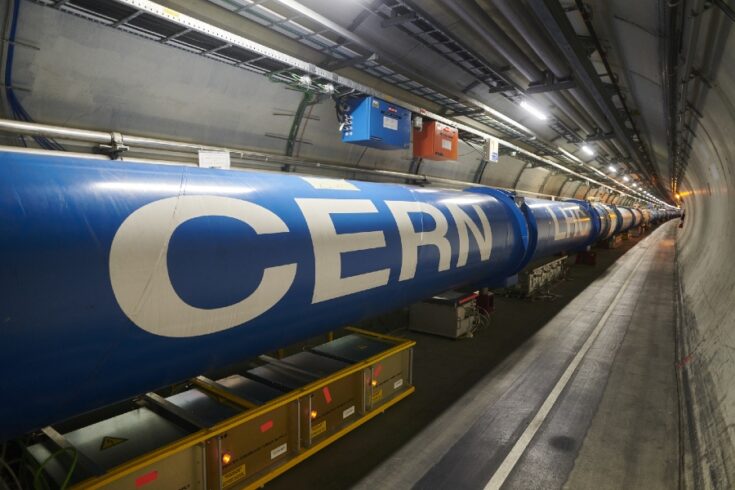 In April, scientists at the European Centre for Nuclear Research, or CERN, once again fired up their matter-probing particle sniper, the Large Hadron Collider (LHC).

After a three-year shutdown for repairs and upgrades, the collider once again started firing beams of protons at close to the speed of light around its colossal 27 kilometre ring.

Now the hunt is on for hints that nature could be hiding something beyond the horizon set by our current best theory: the Standard Model of particle physics.

Testing the limits of the Standard Model

The Standard Model, which describes the quantum world of particles and the stuff that makes them up, is one of the most successful theories in science. Since it was first thought up in the 1960s and 1970s, it has made hundreds of predictions that have been successfully tested. The most recent of which was the discovery of the Higgs boson (the particle representative of the Higgs field, which imbues particles with mass).

Put simply, the Standard Model helps us to understand what the building blocks of the Universe are made from and how they fit together to construct all of the visible matter and energy in the cosmos.

For all its success, the Standard Model is known to be incomplete. On one hand it describes how the quantum realm works but when you try to integrate the realm of gravity it all falls apart. In fact Einstein himself spent the last years of his life in a fruitless search for a ‘grand unified theory’ that would bring these realms together.

The Standard Model explains how the building blocks of the visible Universe work. But it offers no explanation for the mysterious dark matter and dark energy that make up the ‘invisible’ majority of the Universe. Nor can it explain how matter won dominance over antimatter when both should have been created in equal measure in the Big Bang.

It is widely expected that solutions to the Standard Model’s limitations will emerge first as physicists observe subtle deviations from theoretical predictions. This may indicate the presence of new, previously unknown particles or forces.

Getting heavy with gravity

Incredibly, the Standard Model includes no description of gravity. Einstein’s theory of general relativity describes with wondrous accuracy how the world of ‘big things’ works. Scientists have been trying to ‘break’ relativity for over 100 years, testing prediction after prediction and watching them pass with flying colours. Likewise, the Standard Model’s description of the workings of the world of ‘tiny things’ has withstood decades of testing. But, try as they might, no one can make the theories of relativity and the quantum realm play together.

The Standard Model describes how each of the fundamental forces should have a messenger particle, or boson, that communicates how that forces interact with other particles. The ‘strong’ nuclear force has the ‘gluon’; the ‘weak’ has the ‘W’ and ‘Z’ boson; and electromagnetism has the ‘photon’. Yet no such particle emissary has been discovered for the force of gravity.

Getting messy with mass

But it still can’t explain why some particles seems to interact so much more enthusiastically with the Higgs field than others.

The ‘top quark’, for example, has more than 350,000 times the mass of the electron. This is about the same as the difference between the Sun and Earth. Yet the two particles are about the same size.

Do particles get their differing mass by interacting with the Higgs field in different ways? Is it because the Higgs particle we discovered in 2012 is just one member of a larger family of more massive Higgs particles? Or is it that they get their mass from an as yet unknown mechanism is just another question physicists hope the LHC upgrade will help to answer.

What’s the matter with antimatter?

One of the most enduring puzzles in physics is the relative lack of antimatter found in the Universe. According to the Standard Model, the birth of the Universe in the Big Bang should have spawned matter and antimatter in equal amounts. Antimatter particles, whose properties like charge and spin are flipped from their ordinary matter counterparts, annihilate on contact with their ‘normal’ cousins. This means that literally everything should have been obliterated in the few moments after particles first coalesced from the energy soup of the Big Bang. But somehow, that balance was tipped to create the matter-dominated Universe we live in today.

By recreating the conditions that followed the Big Bang with increasingly powerful ‘little big bangs’ the upgraded LHC will have a better chance of getting to the bottom of this mystery.

Shining light in the dark (matter)

Yet another hint that there exists physics beyond the Standard Model is the fact that the theory has no explanation of the existence of dark matter. Physicists believe that dark matter outweighs normal matter by a ratio of five to one. While dark matter has yet to be directly observed, its existence has been inferred from the very visible gravitational effects it has on the stuff we can see. For example, it is believed that the gravitational pull of dark matter causes the galaxies to rotate at their observed speeds. Speeds that would be impossible in the presence of normal matter alone.

Given that, by its very nature, dark matter is invisible to us, the upgraded LHC will search for evidence of dark matter. It will search the results of its particle collisions for something it cannot see. Particle collisions within the LHC are very much a matter of what they put in should equal what they get out. If certain amount of energy is input, then a certain amount of energy should be output. If some of that energy is missing, it might have been carried away by an invisible dark matter particle.

Hints of physics to come

In 2021, there emerged news of two experimental results that may be the first clue of these anticipated deviations from the Standard Model.

The first came from the Large Hadron Collider beauty (LHCb), an experiment at the LHC that specialises in studying the decays of a short-lived kind of particle known as a bottom quark. According to predictions dictated by the Standard Model, bottom quarks should decay in such way that they produce either muons or electrons in pretty much equal measure. But the LHCb measurements seemed to show a deviation from this prediction.

The second came from the opposite side of the pond at the ‘Muon g-2’ experiment at Fermilab in Chicago. The experiment measures the strength of the muon’s internal magnetism, which reflects the muon’s interaction with every possible force and particle. Here, again, there seemed to be deviations from the Standard Model’s predictions.

But were these results just flukes, random (and expected) statistical deviations? If Standard Model predictions are correct, these results would require freak statistical fluctuations that are expected to occur only once in about 1,000 and 40,000 experiments. That may sound like an unlikely level to be ‘just a fluke’. But, it is long way off the one in 3.5 million fluke probability that is needed for something to be claimed as a discovery.

Both of these results could be the first hints that there is an as yet undiscovered fundamental particle or force hiding just beyond the periphery of the Standard Model. A particle or force that could revolutionise our understanding of the Universe.

The LHC’s high-luminosity upgrade will significantly increase the rate of collisions that appear in the detectors, which means more measurements of more particles as they decay. If these results are mere statistical blips, their frequency will be lost in the sheer weight of non-blipping results. Of course, more collisions at higher energies could mean that other anomalies might appear that could hint at further deviations.

The upgrades have boosted the power of the collider from its previous energy best of 13 tera electron volts (TeV) to a new high of 14 TeV. This means that, as they fly around the LHC’s 27km-long ring, each batch of protons will carry the energy of a 360 tonne passenger train travelling at 100 miles per hour. As Einstein’s equations tell us that energy and mass are equivalent, all this extra energy increases the chances of the LHC creating new, more massive particles. Anyone of which could fill a gap in the Standard Model or, perhaps, break it entirely.

From 2029, the upgraded LHC will be able to produce 140 collisions each time two-particle bunches meet at the heart of the ATLAS and CMS detectors. This is up from just 30 collisions before the upgrade.

With every collision we create in detectors like the LHC, the closer we get to the breakthrough required to start to answer fundamental questions. Questions that will allow us to plug the holes in our understanding of the Universe.