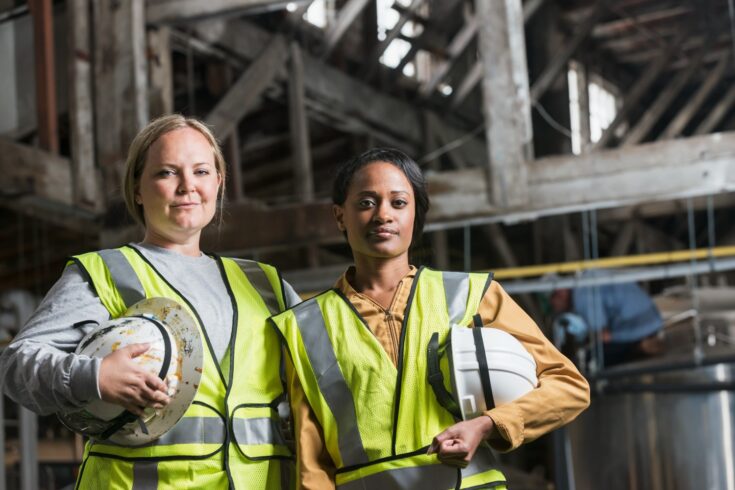 Despite disruptions caused by COVID-19 the scheme was effective in galvanising a group of people to advocate for women in engineering in academia.

Three years ago, EPSRC launched a call to fund 10 one-year memberships to WES. The call was established to celebrate the WES 2019 centenary, but also as a recognition of women’s under-representation in engineering.

It also recognised the role that EPSRC can play in supporting and encouraging more women in engineering, especially in academia.

We expected the applicants to have a strong interest in equality, diversity and inclusion (EDI).  However, experience in EDI practices wasn’t mandatory and we wanted to make sure that key objectives were considered.

Applicants had to plan to use the membership to advance their careers, gain new skills, and advocate for EPRSC, WES and more broadly, engineering as a discipline.

We awarded nine memberships to six women and three men in June 2019, and they were extended for two years due to the COVID-19 pandemic. At the end of this period, we conducted an evaluation to understand if the scheme had achieved its purpose and to see how we could improve a future call.

All participants agreed to be interviewed. During the conversations we asked the members to talk about:

The interviews were very revealing and showed how a small scheme like this is relevant and capable of effecting change. More surprising still if we consider the effect of COVID-19.

The first thing that the interviews showed is that women engineers in the UK need a dedicated space, like WES. When I spoke to the six women that participated in the scheme I asked them about their motivations to apply.

In their responses they talked about the loneliness of being surrounded by men through the different stages in their careers, from their undergraduate studies to entering academia.

They also told stories of badly planned maternity leave, of babies and family responsibilities and the choices they had to make. Some of them mentioned their desire to help younger women as a recognition of the support they had received from older, more established academics. They said mentoring was their way to “give back to the community”.

For the men interviewed, the motivations were mostly around equality and fairness but also around practical reasons. Some of them argued that lack of inclusivity meant losing a huge pool of talent. However, they also recognised the role that men had in correcting imbalances of power.

In summary, both women’s and men’s responses showed the relevance of WES as an organisation, even after 100 years, to target exclusion and gender inequality in engineering.

The need for a high enough platform from where to stand

Another issue that came out of the interviews is that inequality is best tackled as a community effort. Members found the initial meeting that we held inspiring.

They felt that they shared similar difficulties and were motivated by learning from each other and working together. However, due to COVID-19, we were unable to organise more in person meetings to harness that initial momentum.

Moreover, and more importantly, the interviewees mentioned the fact that they were chosen by EPSRC gave them a special status and a platform to voice specific problems women in engineering face. Some of them were able to organise events within their own institutions and for others, the membership gave them more visibility in their university departments.

This quote sums up the ways in which some members used the membership to advance EDI in their own environments:

[The membership] gave me a visible mandate for starting and continuing conversations on gender and EDI with leaders at all levels in academia, globally and in more extensive engineering circles.

It spurred me into action in a variety of ways, from robustly role modelling and getting involved with outreach activities for girls to delivering scientific events within large flagship conference, for women.

I also submitted my candidature for a trustee position on the WES board of Directors.

The third surprising element is that the value of the membership extended to more subtler benefits such as a greater belief in oneself and a sense of achievement. Due to the barriers that women face in engineering, some feel the need to prove they are as good as men.

The following quote shows why we believe the scheme was a success in supporting women in engineering:

Since being a member, actually lots of nice things happened to me. For example, just two days ago I was on the list of the ‘engineering heroes’ of my university.

This was because I’m a role model for students, because I’m young and because I’m a woman, and I work alongside engineering colleagues, who are in the majority white men.

I also feel more responsible to be active on social media, to be more present there, again just to act as an example, as a role model. I realised that I needed to overcome my imposter syndrome and lack of confidence.

Most of our female students are in the same situation so they are really grateful. They really need someone a bit like me so they can think, ‘Oh, this is actually something that can happen to me’.

The evaluation and further conversations with members demonstrated that the scheme achieved its objectives. Members were able to use the scheme to gain skills and knowledge and advance their careers. They also became advocates for gender equality, EPSRC, WES and engineering in general.

For EPSRC, it shows the power and the responsibility that we have as a funder, in raising awareness of and addressing inequalities. Our influence is far reaching and crucial, and we are active contributors to a more equitable system.

Recently we published the actions we will take to address under-representation of women in our portfolio and produced a set of EDI expectations for the community. We will outline how we will continue to embed EDI in the community we support, through our EDI action plan that will be published later this year.

We hope that this cohort will continue to work within their institutions to effect change and generate support for future generations of women engineers.

For our part, we have learned lessons on how best to work with future cohorts in conjunction with WES. In addition, we have learned the importance of channelling their enthusiasm and energy to promote women in engineering.