How space science can help us combat climate change 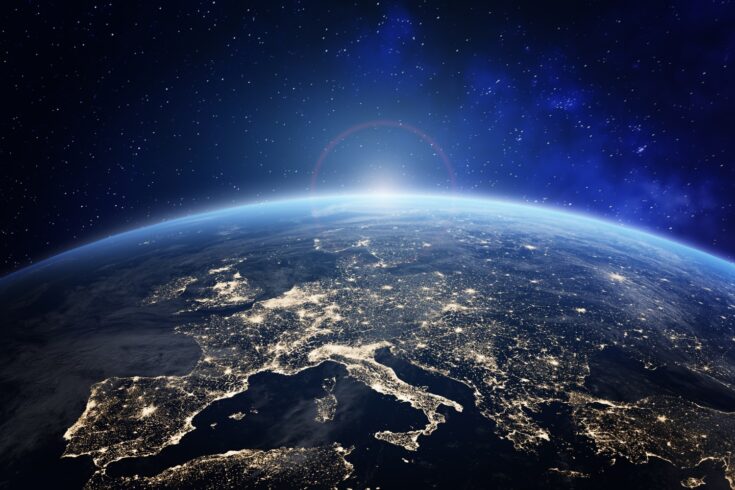 To celebrate World Space Week, we take a look at how space science is helping us understand, and take action against, climate change.

When you think of space research, climate change probably isn’t the first thing that pops into your head. You’re more likely to picture astronauts floating around the International Space Station, or engineers designing rovers that can traverse volcanoes on Mars.

However, Earth is a planet too, and we can learn a great deal about our climate from the vantage point of space.

Together organisations like NASA and the European Space Agency have over 150 satellites in orbit around the planet. They are watching the oceans, land, ice, atmosphere and biosphere.

On World Space Week, we focus on what space science is doing to help us mitigate against climate change.

How do we know that the Earth is warming?

In 2015, 196 countries around the world signed up to the Paris Agreement (United Nations Climate Change). This ground-breaking legislation legally forces governments to curb their carbon emissions to limit global warming to less than 2°C.

This event was only possible because scientists had unequivocal proof that global temperatures have risen at unprecedented rates over the last century.

But how do scientists know that the Earth is warming?

Today, hundreds of miles above the Earth’s surface, a vast network of satellites is collecting data on our planet’s climate system. These satellites provide accurate measurements of the temperature of our oceans, land and atmosphere.

However, that wasn’t always the case. The first person to provide proof that the planet was heating up was actually a little-known amateur scientist called Guy Callendar.

In 1938, Callendar painstakingly collected records from 147 weather stations across the world. He discovered that global temperatures had risen 0.3°C over the previous 50 years.

However, at the time his findings were largely ignored by:

It wasn’t until the advent of satellites that Callendar’s measurements could be confirmed, and the world started to take notice.

A new age of satellite observations

The first satellite to provide an accurate measurement of Earth’s atmospheric temperatures was NASA’s Nimbus III, which was launched in 1969.

Today’s satellites are capable of much more sophisticated measurements. In Britain, huge advances in measuring global surface temperatures have been made by scientists at RAL Space. RAL Space is based at the Science and Technology Facilities Council’s (STFC) Rutherford Appleton Laboratory near Didcot in Oxfordshire.

Since the 1980s, scientists at RAL Space have helped develop and calibrate a series of instruments that can measure sea and land surface temperatures to unprecedented accuracy.

This began with the Along-Track Scanning Radiometer (ATSR) series. These were fitted on board the European Space Agency’s satellites:

After the Envisat satellite retired in 2012, RAL Space developed the Sea and Land Surface Temperature Radiometer (SLSTR) (STFC) for the sentinel satellites.

The satellites form part of the European Union’s Copernicus Earth observation programme, which is providing us with an unprecedented picture of how Earth’s climate is changing.

There are two SLSTR instruments in orbit currently, and together they are able to cover almost all the globe in a day.

The importance of calibration

A lot of work goes into designing, building, testing and calibrating a satellite instrument.

It’s vital that we can trust satellites and know that the data they provide us with is the truth.

Calibration isn’t particularly sexy, but it is so important.

It underpins climate science and our trust in the data that is produced by NASA and the European Space Agency.

You can’t tweak or tune in space

Unlike a car, which can be serviced in a garage, once the instrument is strapped to a rocket and launched into space you can’t tweak it or tune it. For that reason, a huge amount of work goes into making sure the instrument works before it even leaves the lab.

One of the scientists responsible for this work is Dr Caroline Cox, a Research Scientist in the Earth Observation and Atmospheric Science Division at RAL Space.

Our job in the team at RAL Space is to look out for the instrument and make sure it keeps doing its work properly.

We monitor instrument level parameters, for example temperatures, mechanism jitter, and performance of the detectors, as well the actual calibrated radiances that will be transformed into the surface temperatures.

We also suggest improvements that can be made to the way the satellite data are processed.

The SLSTR detectors that are sensitive to infrared light need to be cooled in order to make accurate measurements.

One of our most important roles is to check that the instrument is cool enough, and that the on-board calibration reference sources (two black bodies held at fixed temperatures) are working properly so that SLSTR continues to produce good data.

Once in operation, RAL Space scientists continue to calibrate the instruments by comparing them with measurements taken from the ground.

For land measurements, scientists will go into the field and literally point sensors at trees, grass and soil.

They will then compare the measurements they get with that from the satellite as it goes overhead.

For oceans, researchers have installed a radiometer on the Queen Mary 2 ocean liner. The ship measures the temperature of the ocean as it travels. This data is then compared with satellite measurements.

The next generation of climate observations

The work never stops, and RAL Space scientists are currently preparing and testing two new SLSTR instruments which will be launched shortly.

They are the most accurate thermometers that we have ever launched into space.

They can measure sea surface temperatures from 800 km away and are accurate to 0.2°C.

That is the equivalent of standing on Big Ben in London and looking at the Eiffel Tower in Paris.

With the upcoming launches, researchers now have about 40 years of sea surface temperature data at their fingertips. This is vital for understanding long term trends and global warming.

However, it will also help in the future too, as we can use that data to see the impact of net zero policies on climate change.

Earth observation satellites don’t just help us keep a tab on global warming. They also help us fight climate change in other ways too.

One way is through monitoring forest fires. Climate change is making wildfires more prevalent. For instance, in October last year there were five times more forest fires than would be expected at that time of year.

From Australia to Greece, and California to Siberia: wildfires have ripped through towns and villages this year, causing countless misery to thousands.

Satellites can help in several ways.

During the 2019 to 2020 wildfires in eastern Australia, scientists at RAL Space and University of Leeds kept a close eye on near-real time satellite observations for the region.

As well as the visible plumes of smoke, the team tracked trace gases of:

These gases are toxic to humans and wildlife.

The team were able to show the carbon monoxide plumes travelled all the way around the Southern Hemisphere, over to South America and back across the Southern Ocean to the west coast of Australia.

The research showed that forest fires can have a knock-on effect on air quality around the world.

The Sentinel satellites have detectors that are very sensitive to bright signals.

The instrument automatically identifies these signals as fires on the ground.

This allows us to work instantaneously with forest managers and fire fighters to direct those resources to where they are needed.

For instance, we can tell forest managers to cut fire breaks in advance of the fire, or we can tell firefighters physically where to go and where the fire is spreading.

Improving the health of forests

As well as combating fires, satellite data can also be used to measure the health of forests.

That’s because the specific wavelength of light that a tree emits reveals a great deal about:

This is important as our forests are vital weapons in the fight against climate change. Healthy trees soak up carbon dioxide from the atmosphere, but diseased trees can release CO2.

Knowing which types of trees are healthiest and most robust will help environmental agencies make informed decisions about which trees to plant and where.

These are just some of the ways that space science is helping us understand and mitigate against the effects of climate change. However, there are many more examples.

For instance RAL Space scientists are developing instruments that will ensure our understanding of the carbon cycle (RAL Space), one of the most important factors in climate change, is accurate and reliable.

Together these projects will shine a light on Earth’s climate, and help us preserve our planet for future generations.