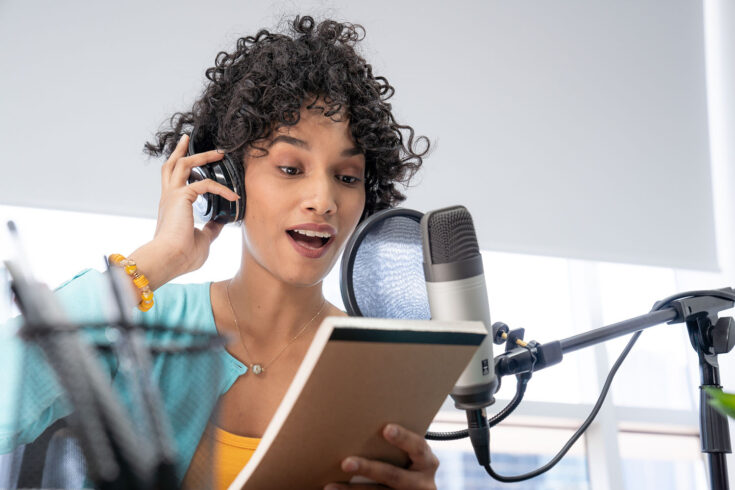 The Arts and Humanities Research Council and BBC Radio 3 have announced the 2021 New Generation Thinkers: ten of the UK’s most exciting early career researchers.

Every year, BBC Radio 3 and the Arts and Humanities Research Council (AHRC) hold a nationwide search for academics with game changing ideas that will resonate with a wide audience.

The New Generation Thinkers are given the prestigious opportunity to communicate their research on BBC radio and television. They also have unique access to training and support from AHRC and the BBC.

The New Generation Thinkers have been chosen for their ability to communicate complex ideas and change the way we think.

This year’s cohort will share their research into important issues such as how we remember British history and the role that art must play in informing political policy.

The 2021 New Generation Thinkers will also explain how punctuation has determined the course of global history and share insights into the influence of colonial migration on classic literature.

Preparing the next generation

The final ten academics selected to take part in the scheme were chosen after a four-month selection process, including a series of day-long workshops.

They have undergone training and development with the AHRC and will spend a year being mentored by producers from Radio 3’s Free Thinking programme.

In previous years, New Generation Thinkers have gone on to become prominent public figures as well as the face of major documentaries, TV series, and regular figures in public debate.

New Generation Thinkers is a flagship scheme for the AHRC and is vital in supporting the next generation of arts and humanities researchers to connect with the public and challenge what we think we know.

For over a decade, the New Generation Thinkers scheme has brought academic research to a wider audience as part of AHRC’s longstanding commitment to public engagement with impact.

The New Generation Thinkers scheme continues to provide researchers with a unique opportunity to share their findings, push their research in new directions, and develop their communication skills.

Making hypotheses for our future

With our colleagues at AHRC we want to help those who are engaged in research projects which explore our past and present, find links between the two, and make interesting hypotheses for our future, be able to explain and bring to life their important work to a wide audience.

The following proposals were successful and received funding (alphabetical order by applicant):

Julia Hartley is from Brussels, where she grew up in an English, Italian and French-speaking household, before moving to the United Kingdom to attend university.

She holds a doctorate in Medieval & Modern Languages from the University of Oxford and an MA in Iranian Studies from SOAS.

Her first book Reading Dante and Proust by Analogy (Legenda, 2019) has been called “an irresistible invitation to love literature” (Modern Philology) and “an important example for literary comparisons to come” (Modern Language Review).

Florence Hazrat is working on brackets in chivalric stories of the Renaissance. She is interested in any kind of punctuation and is currently writing a volume on the history and culture of punctuation for Reaktion Books, London.

Her blog and podcast are called Standing on Points, and explore the quirky wayward appearances of dots, dashes, and company in our writing from hieroglyphs to text messages.

Mirela Ivanova is a cultural historian of Eastern Europe in the premodern world, and a Junior Research Fellow at University College, Oxford.

Her work explores what tools communities used to define themselves in the past, and how these definitions resonate in the contemporary history of Eastern Europe.

She is particularly interested in moments of transmission and displacement, whether across languages or political cultures, and how such moments can reveal the tensions inherent in communities and their perceptions of themselves.

Sarah Jilani is a British-Turkish researcher and culture journalist. She is currently an AHRC-Newton Trust PhD candidate at the Faculty of English, University of Cambridge.

Her thesis considers subjectivity and decolonisation in post-independence (1950s to 80s) African and South Asian literatures and film.

Her freelance writing on contemporary art, film and books can be found in The Times Literary Supplement, The Economist and The Guardian, amongst others.

He has published two pamphlets of poetry: The Coast Will Wait Behind You (Art Editions North, 2015) and Definitions of Distance (Red Squirrel Press, 2012).

A winner of New Writing North’s Andrew Waterhouse award, Jake has tutored for The Poetry School and led many workshops in schools.

Adjoa Osei’s research is funded by AHRC and the Duncan Norman Scholarship, and focuses on twentieth-century staged performance and visual arts culture.

Her current project places transnational, relatively unknown, Afro-Latin American women artistes at the centre of international artistic and intellectual modernist practice, focusing on the period 1920 and 1945.

Jake Richards specialises in the history of the African diaspora, law, and empire in the Atlantic world. His first book project analyses the abolition of the transatlantic slave trade as a violent legal regime.

His academic research has appeared in the journals Past and Present and Comparative Studies in Society and History. He has also written for History Today and appeared on the BBC’s In Our Time.

Over the next two years, he will co-curate an exhibition at the University of Cambridge Museums on the connections to Atlantic enslavement present in the Museums’ varied collections.

Emigrants were readers and writers too, and the literary marketplaces was filled with their letters and life-writing, emigrant manuals and guidebooks, periodicals and novels.

Vid Simoniti is a Lecturer in Philosophy at the University of Liverpool. His academic writing focuses on how art expresses political thought.

He has published on socially engaged project-based art, the American anti-racist artist Adrian Piper, and connections between art and biotechnology, among other topics.

He publishes in both art history and philosophy journals. In collaboration with the Liverpool Biennial, Vid has recently recorded the podcast series Art Against the World (launch January 2021).

Besides philosophy and art history, his interests include classical music, techno and video games. He lives in Liverpool with his partner and their robotic vacuum cleaner.

Lauren Working’s first book, The Making of an Imperial Polity, explores how English colonial projects in the Americas, from Venezuela to Virginia, influenced taste and politics in early seventeenth-century London.

She has published on topics including intoxicants and rituals of sociability, Jamestown archaeology, and Native American artefacts.

Lauren freelances for the National Portrait Gallery and is developing projects that use material culture to explore the entangled histories of colonialism and English heritage.