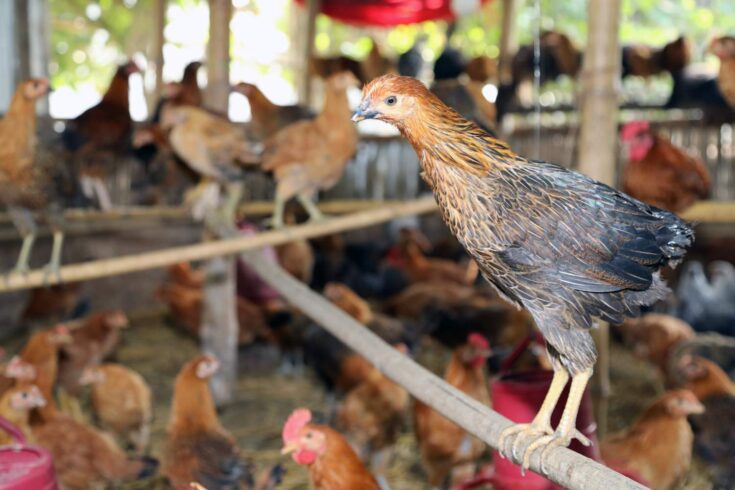 A multinational programme of research on zoonoses in livestock systems led to effective policy change and training for next generation researchers.

Zoonoses, a specific group of diseases, are a major public health threat. They affect food and nutrition security, economic security, and animal health and welfare. The Zoonoses and Emerging Livestock Systems (ZELS) programme focused on zoonotic diseases in low- and middle-income countries (LMICs).

Economically disadvantaged communities in LMICs can be disproportionately affected by zoonotic diseases due to an array of factors, such as:

Livestock plays an important role in the livelihoods of these communities, so livestock diseases, including zoonoses, can have a devastating impact on incomes and pathways out of poverty. Livestock systems in many LMICs are also rapidly changing, bringing new human and animal health challenges to the forefront. The ZELS projects researched the health risks associated with these rapid changes, leading to effective policy change in managing zoonoses and training for the next generation of researchers for future preparedness.

Zoonoses are diseases that can be transmitted from animals to humans, such as bovine TB, brucellosis, COVID-19, rabies, or avian influenza. Diseases can circulate in livestock, wild or domestic animal populations. These diseases have the potential to become an epidemic or pandemic, so it is vital that we understand how they work and how to prevent spread to humans. An estimated 75% of emerging infectious diseases originate in animals, and the frequency of emergence is increasing.

Zoonotic diseases can be transmitted through:

The ZELS programme funded research on emerging and endemic zoonotic diseases in LMICs, exploring contributing factors and working to reduce the impacts on marginalised communities and their livestock.

The programme funded 17 projects across 10 countries at a total of £22.6 million. This includes £1.5 million for the Associated Studentship (ZELS-AS) scheme, which included 16 studentships that ran alongside the main ZELS projects. ZELS ran between 2012 to 2021 and involved 19 UK institutions and 30 overseas institutions.

The ZELS-AS programme was led by the University of Glasgow. The training offered emphasised the importance of transferrable skills and international collaboration, taking advantage of ZELS’s interdisciplinary structure.

This case study is an overview of how the ZELS initiative and projects used collaboration and an interdisciplinary approach to achieve impact, focussing on five projects from the programme

ZELS worked to build strong collaborative relationships between the UK and international partners, aiming to build expertise and infrastructure for long-term zoonoses surveillance. The strength of these relationships was fundamental in influencing policy and creating social and economic change.

The initiative emphasised the importance of interdisciplinary research (especially for creating and tracking on-the-ground impact) and looked for project proposals that incorporated this approach. Many projects spanned several disciplines, ranging across the life sciences, clinical sciences, animal health, environmental science, and social sciences.

Using an interdisciplinary approach is not easy; we’re all still learning. I think it’s an important outcome of ZELS, for us to learn how to conduct interdisciplinary science, regardless of where you are, whether it’s research in the UK, Europe or Bangladesh.

The interdisciplinary nature of the ZELS projects was also intertwined with the initiative’s aim of researching livestock zoonoses and how they affect populations, aiming to help prevent and reduce disease.

BALZAC investigated how human behaviour in Bangladesh is affecting the transmission of avian influenza virus (AIV). Researchers analysed the poultry production systems, from backyard and small commercial farms to wet markets, to find factors that influence the spread of the virus.

Some AIV subtypes can infect humans and cause fatalities, such as the H5N1 subtype, which is a Highly Pathogenic Avian Influenza virus (HPAIV) found in many countries around the world. It can be found particularly in the poultry populations of South and Southeast Asia. HPAI viruses can cause 90-100% mortality rates in chickens.

Populations that live near these areas are vulnerable to HAT, commonly known as sleeping sickness. HAT is caused by trypanosomes, single-cell parasites spread by tsetse flies that feed on a wide range of wild animals. Trypanosomes are tolerated by wild hosts, but in settled areas tsetse may feed on humans and livestock and infect them with trypanosomes. Infection leads to disease and, ultimately, death. HAT can also be easily confused with malaria, leading to misdiagnosis and incorrect treatment.

The project examined spill-over from wilderness to farming areas in Tanzania and how it was affecting communities on park margins who may not have access to proper medical care. The project discovered that tsetse populations were being controlled in Tanzania due to the widespread treatment of cattle with pyrethroid insecticides by farmers, preventing the spread of HAT in the process.

Three ZELS projects working together investigated bacterial and viral zoonoses, including focusing on interventions to reduce their impact:

Across the three projects, the collaborators include:

Training the next generation

ZELS-AS ran alongside the ZELS research projects and included 16 PhD projects. Each student split their time equally between the UK and their project location, plus having the opportunity to undergo a three-month professional internship for PhD students placement in an area outside of academia.

ZELS-AS gave students hands-on experience in their area of interest, helping them build key transferrable skills. Collaboration was a vital component of the ZELS-AS program, with students having dedicated discussions together at annual meetings, as well as sharing resources online.

Professor Steve Torr, who led the Life on the edge project, says:

The ZELS-AS was a real strength; it was a core collaboration.
They learnt about each other and built lasting personal and professional relationships.

The ZELS-AS structure also taught the importance of an interdisciplinary approach. Students had two or three supervisors within their project, allowing them to learn from individuals from different disciplines with different perspectives.

ZELS was also a great opportunity for postdoc and early career researchers. Dr Jo Halliday completed her postdoc in the Impact and Social Ecology of Bacterial Zoonoses in Northern Tanzania project, a BBSRC-funded precursor to SEEDZ, before working as a co-investigator on the Brucella project. Later, she worked on the OOHTZ project and went on to successfully lead projects outside of ZELS.

Dr Jennifer Lord also worked as a postdoc on the Life on the edge project, later becoming a co-investigator on another ZELS project, Enabling Livestock-Keepers to Eliminate Sleeping Sickness, and is now leading projects funded by NERC and MRC as the principal investigator.

BALZAC also helped design the curriculum for the new Field Epidemiology Training Program for Veterinarians, which will assist in assessing and addressing needs within animal health systems.

BALZAC worked directly with the Bangladesh government. One partner, Professor Nitish Debnath from the Chittagong Veterinary School, working at the time for the Food and Agriculture Organisation of the United Nations, had strong policy links and was able to initiate communications. The project also conducted policy round tables, supported by Chatham House, to report findings and help build objectives.

These round tables helped support the establishment of a One Health Secretariat for the development of zoonotic disease control policies in Bangladesh. BALZAC research evidence also fed into the National Avian and Pandemic Influenza Preparedness and Response Plan. Both outputs will help implement disease interventions for avian influenza in the long term.

An effective way to achieve change is to work with national and local policymakers. Life on the edge demonstrated that the widespread use of pyrethroids in Tanzania was due to the government policy of subsidising pyrethroids to support their use by livestock keepers. While the subsidy has now stopped, farmers continued to use pyrethroids because they understand and recognise the benefits for their livestock.

Project team members have used this knowledge to contribute to World Health Organization global plans for the control of HAT through consultations and presentations. Methods developed over the course of the project are also being applied in programmes for HAT control in Uganda, Malawi, and the Democratic Republic of the Congo.

The Brucella project focused on finding the causative pathogen species for human brucellosis, as well as identifying:

The data generated by the project fed into policy, and the Brucella team contributed to drafting the National Strategy for Prevention and Control of Brucellosis in Humans and Animals for Tanzania.

By targeting zoonoses that affect livestock in low-middle income countries, ZELS acted as an opportunity for existing communities of researchers to collaborate on shared research aims. ZELS emphasised the importance of collaboration and networking, especially for building a connected infrastructure for long-term impact. Projects in similar locations could also collaborate throughout the initiative.

Several of the projects were based in Tanzania. Many of us shared the same Tanzanian-based partners, especially regarding senior levels of government.

We were able to have joint launch meetings and share some resources. Collaboration spanned from sharing transport, equipment and knowledge, or staff to talking to the same minister for policy impact.

The ZELS initiative had a management unit, comprised of a knowledge broker and secretariat, plus the ZELS independent programme advisory group. Together, these two components built collaborations by making connections with relevant stakeholders and networks.

Annual meetings were conducted, where researchers could share progress reports and learn more about different approaches and methods. The ZELS social science group was also formed, where social scientists could discuss findings and collaborate on publications.

There were opportunities provided for those connections to be created, and that was a really nice community and a network structure to work within. I think it was hugely helpful.

The collaboration networks have also persisted and developed beyond the scheme’s lifetime with follow-on research, training and capacity-strengthening activities, all building from the foundations of the ZELS projects.

The program gave us the space, by providing time and budget, to build connections with other projects. If we’d just stuck to our own projects, we wouldn’t have realised that there might be another way of looking at issues or ideas.

ZELS’s focus on collaboration and networking has been a crucial part of capacity building with international partner regions. The strong links and knowledge exchange facilitated by the initiative have created a platform for future zoonoses research.

Life on the edge: tackling human African trypanosomiasis on the edge of wilderness areas

Life on the edge: tackling human African trypanosomiasis on the edge of wilderness areas GtR page

Social, Economic, and Environmental Drivers of Zoonoses in Tanzania (SEEDZ)