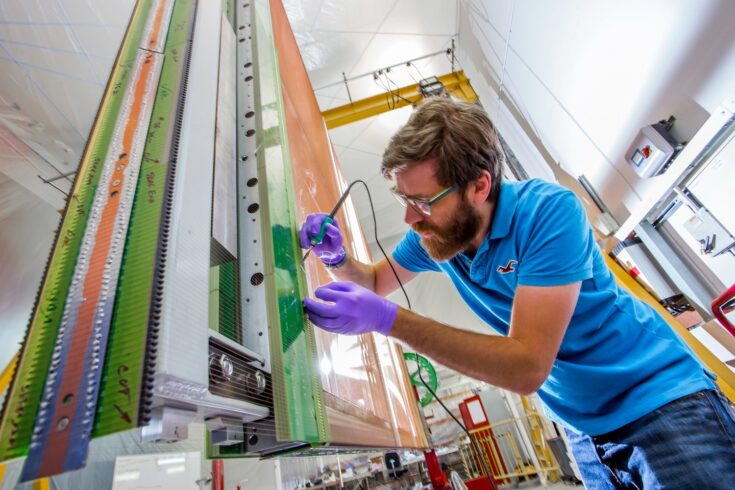 Bespoke factory facility created to build anode plane assemblies for the Deep Underground Neutrino Experiment, is up and running at STFC’s Daresbury Laboratory.

When the Deep Underground Neutrino Experiment (DUNE) opens in the US, many of the biggest components, the anode plane assemblies (APAs), will have been built at the Science and Technology Facilities Council’s (STFC) Daresbury Laboratory. In order to accommodate this unique order, a multidisciplinary team from Daresbury Laboratory has constructed a bespoke factory facility that will ensure they are built to the highest specification. Recently the factory has begun production of these vital elements.

DUNE is an international experiment for neutrino science. As the name suggests, it is 2 neutrino detectors deep underground but also 1,300km apart. One at Fermi National Accelerator Laboratory (Fermilab) in Illinois and one at Sandford Underground Research Facility in South Dakota. The neutrino beam will be produced at the Long Baseline Neutrino Facility at Fermilab, then the 2 particle detectors will measure the difference in particles at the start of the beam and the end.

To measure those differences, the neutrino detectors will contain 17,000 tonnes of liquid argon. Within the liquid argon there will be tiny electrical signals created by neutrino interactions. The anode plane assemblies will read these signals and send them back to be investigated, making them key to the success of the project.

Technician Karl Myers from the University of Manchester adds a spool of fine wire to the APA winding head. Credit: STFC

When we say that the APAs are a big component of DUNE, we aren’t exaggerating!

Each APA measures 6.3m wide by 2.3m high. They are huge rectangular frames, on to which copper-beryllium wires, about the width of a human hair, are wound.

A bespoke facility for millimetre precision

An initial frame was made in a temporary facility located within the Daresbury Tower building. This was shipped to CERN for cryogenic testing, validation and improvements at the ProtoDUNE facility. At the same time, a new facility was being created within a former accelerator hall at the site.

The new DUNE APA factory has been designed specifically for this project. A prep area leads into a huge hall where 4 winders have been installed. They will wind approximately 24km of the hair-width wire onto each frame. The winding takes place over 4 planes. This means that it is wound in 4 different directions.

During the planning for the factory, colleagues at STFC saw an opportunity to improve the mechanical design which originally required the frames to be manually turned in order to cover all 4 planes. The winding machinery went through various iterations, but now has a winding arm which effortlessly moves the frames around without the need for physical interventions. In addition, there is a winder head which ensures that the fine cable is kept at a consistent tension.

Once in place, the cable tension is tested then it is soldered. Amazingly, each frame has approximately 13,000 hand-soldered points. This precision is vital for the APAs to work effectively when they reach their final destination in the underground laboratory.

Once they leave the winding frames, the APAs are lifted by crane up to the final area where they are carefully packaged ready for shipping. Even the shipping boxes have been meticulously planned. Designed by the University of Liverpool and CERN, the shipping boxes will double as lifting frames to put the APAs into their final positions when they reach the US.

The entire process involves 40 shifts of time to wind each panel, plus several days in prep beforehand and again several days at the end to ready them for shipping.

The factory is now in production, with Daresbury’s second and third prototypes having been completed in the new facility and sent off to ProtoDUNE 2 at CERN.

Ged Bell, Production Manager for the APA production is really pleased with the results:

To get to this point of production is the result of years of planning – the facility itself was mainly built under strict COVID-19 restrictions so it is a testament to everyone who has worked on it. Now we are already into production – with a final APA heading off to ProtoDUNE 2 at CERN and then 130 which will head out to the US over the next 4 years.

We’ve got 8 technicians now in the facility, the majority of whom have come from our university partners on the project: Lancashire, Manchester, Sheffield and Liverpool. These are all new roles, so it is great that we are able to train and employ them to come and work in this one of a kind factory on a project which will have impact around the world.

Gerard Bell stands besides one of the APA boards on the winding arm. Credit: STFC

What will DUNE science reveal?

Neutrinos are the most abundant matter particles in the universe, so we have a lot to learn from them. DUNE has 3 major science goals:

As well as the big science goals, DUNE will also be a huge asset for training future generations of scientists, researchers and technical staff.

This unique project being delivered by teams at Daresbury Laboratory, is 1 of 3 projects that STFC are delivering on behalf of the UK for DUNE and the Long Baseline Neutrino Facility (LBNF) at Fermilab. Engineers at the Rutherford Appleton Laboratory are creating the target which will produce the neutrinos for LBNF. Another team at Daresbury will construct 3 cryomodules, each housing 6 superconducting radio frequency (SRF) cavities. Before installing into the cryomodules, each cavity will be thoroughly tested using the Superconducting RF Lab (SuRFLab) facility.