Public engagement at the Arts and Humanities Research Council (AHRC) 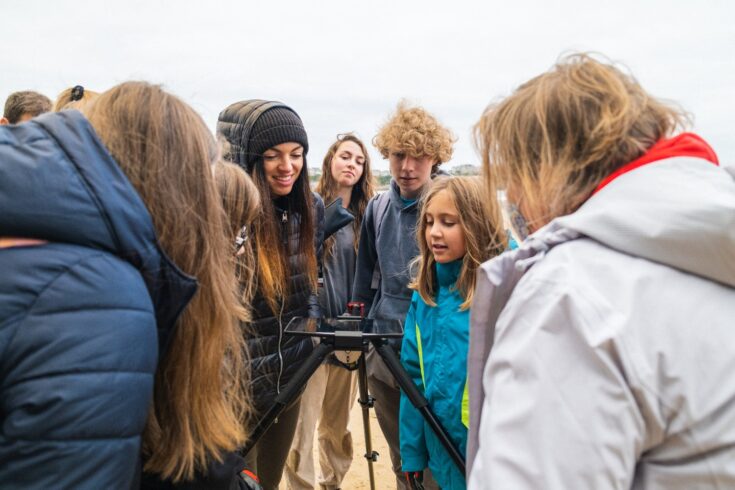 A group of young people walk across the golden sands of Fistral Beach in Newquay, Cornwall. They are joined by a climate scientist, an anthropologist and an animator. Conversations between the researchers and the teenagers focus on the challenges of plastic in the seas and an eroding shoreline, and how research informs their hopes and fears as they express themselves by creating short animations.

Public engagement comes in all shapes and sizes. Waves of Change, which is funded by the AHRC and made in Cornwall by researchers from the University of Bristol, focuses on the relevance of climate research to young people’s lives. It’s about taking research to where people live and work so that they can actively participate; and importantly, helping to unlock more diverse voices.

How we see public engagement

We want to help researchers taking their first steps engaging the public with their research, while also supporting more experienced researchers who have long recognised the benefits of involving people in their work. In recent years we have taken a thematic approach to our public engagement investments, while at the same time continuing to deliver long-standing schemes and partnerships that provide broader opportunities.

For example, a year ago the UK hosted COP26, the major United Nations climate change conference in Glasgow. We used this moment of international attention on climate change to fund 15 public engagement-focused environmental humanities projects jointly with the UKRI. Researchers involved 14 to 18 year olds in conversations about climate research with an emphasis on participatory and co-designed methodologies.

The outputs from these projects demonstrated the importance of creative interventions around the challenge of tackling climate change, whether working to design a board game about the urban environment as a shareable teaching tool, or producing climate zines.

In 2022 we’ve supported a wide range of projects linked to the BBC Centenary, reflecting on the history of broadcasting and looking forward to the future of the broadcast media. A researcher has created a new podcast series about the popular BBC drama, Call the Midwife. Fans of the programme were asked to share their stories, and the first 15 of 28 podcasts were released on the BBC’s centenary.

Meanwhile in West Yorkshire, researchers from the XR Stories Creative Cluster have been working with young people on research about the future of the broadcast media.

Dr Alice Watson from the University of Oxford with Maureen Robertson, a participant in the AHRC-funded BBC 100 public engagement project, ‘Tales from Call the Midwife’. Credit: Mags Robertson

Working together to create opportunities for researchers

Working in partnership plays a strategically important role for AHRC in helping to open up new engagement opportunities for arts and humanities researchers.

We’re continuing to develop our support for the annual Being Human Festival of the Humanities, delivered in partnership with the British Academy and the School of Advanced Study, University of London.

The future of public engagement at AHRC?

Following a major evaluation of our public engagement programmes, we have decided to call the final curtain on our Research in Film Awards (RIFA). Over 7 years the awards have celebrated film-making inspired by arts and humanities research, and we’re very proud of our RIFA winners, one of which went on to win a BAFTA.

We’re continuing to reflect on how we support public engagement with research and provide opportunities that democratise access to research funding while providing the best possible return on investment for our community.

For 2023 we will be continuing our thematic approach by supporting engagement activities around the future of health, wellbeing and social care, inspired by 75th anniversary of the NHS. We’ve already launched a public engagement funding opportunity around the future of healthcare and social care in collaboration with the UK Research and Innovation (UKRI) public engagement team. We’ll also be supporting projects that explore the untold stories and histories of the NHS in its first 75 years.

We’re also committed to embedding public engagement into our broader research funding opportunities and throughout our organisation, in our processes, our panels, and our people. If you apply to us for funding and your research has a really strong public engagement component, we want to make sure we’re able to recognise and support that.

We’ll also continue to work closely with public engagement professionals across UKRI on new collaborations and championing the value and importance of engaging people and communities with research. That is why the publication of the new UKRI public engagement strategy is an important milestone: actively promoting the involvement of people in research and innovation so that it feels more relevant and useful for everyone. By delivering this change, so that people can actively participate in research, the strategy will help to break down the barriers between research and innovation, and society.

As shown by the conversations started on a Cornish beach, we want to encourage researchers to think about how and where more diverse voices, that have often been overlooked, could become involved in their research and at what stage. It is also about the rich potential for ideas and thinking to combine with the lived experience of people and communities, helping to enable knowledge exchange, that benefits both the researchers and the public that have participated.

AHRC’s public engagement-focused calls and opportunities are listed on the UKRI funding finder.

Read more about our public engagement work on the UKRI website.