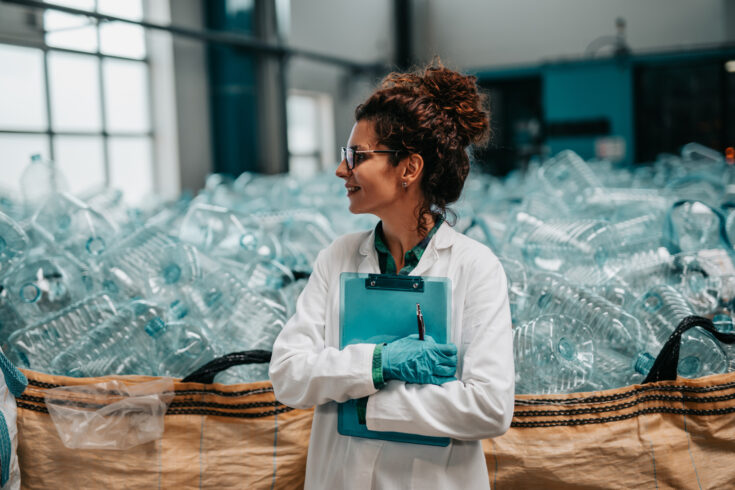 From bacteria that eat disposable bottles, to edible plastics made from seaweed, the world’s scientists and innovators are reviewing our reliance on plastics.

When we first started mass producing it in the 1950s, plastic was seen as a wonder material. Its strength, durability and chemical inertness make it an ideal material for:

However, while at first its longevity was seen as a strength, we now know that the material poses a great threat to the environment.

Plastic doesn’t biodegrade or dissolve in water. Once discarded, it stays in the environment for 100 years or more.

Tiny fragments of plastics (NERC) can also wash into rivers, lakes and oceans, where they are eaten by fish and other marine life. The Natural Environment Research Council (NERC) were among the first to discover this.

This problem was recently captured in a heart-breaking sequence (NERC) in BBC documentary Blue Planet II, when albatrosses were filmed feeding their chicks plastic. The documentary was possible due to a long-running collaboration between British Antarctic Survey and the BBC Natural History Unit.

Unless we do something, the problem will only get worse. The World Economic Forum projects that by 2050, there will be more plastic in the ocean than fish by weight.

Here we look at a whole host of innovative solutions to the problem.

In 2016, scientists discovered a bacterium living in a waste dump in Japan that can break down and consume polyethylene terephthalate (PET), one of the world’s most problematic plastic pollutants.

PET is commonly used to make single-use drinks bottles, clothing and carpets. It takes hundreds of years to break down in the environment.

The work was funded by the Biotechnology and Biological Research Council (BBSRC).

In 2018, scientists at the University of Portsmouth decoded the structure of PETase.

They used the Diamond Light Source X-ray beamline, an extremely powerful device which works in a similar way to a giant microscope.

Shaped like a huge ring, Diamond uses intense beams of X-rays 10 billion times brighter than the Sun to form an ultra-high-resolution 3D model of a molecule.

However, while the scientists were solving the crystal structure of PETase, they inadvertently engineered (National Archives) an enzyme even better at breaking down the plastic.

Two years later, the team announced (Diamond) that they had created an enzyme ‘cocktail’ which can digest plastic (Portsmouth University) up to six times faster than their original solution.

The findings led to the creation of the Centre for Enzyme Innovation (Portsmouth University), a state of the art facility dedicated to tackling the challenge of plastic pollution.

The Diamond Light Source Ltd is funded by the Science and Technology Facilities Council (STFC) and the Wellcome Trust, owning 86% and 14% of the shares respectively.

Traditional plastics are derived from fossil fuels such as natural gas or petroleum. However, bioplastics are plastics made from natural, renewable sources that can degrade once they reach the end of their intended use. They can be manufactured from:

Many scientists and business start-ups around the world are working on developing new bioplastics.

Microbeads are little spheres of plastic less than 0.5 mm in size found in cosmetics, sunscreens and fillers.

Too small to be removed by sewage filtration systems, they often end up in rivers and oceans, where they are ingested by birds, fish and other marine life.

It’s estimated that a single shower can result in 100,000 of these plastic particles entering the ocean.

The beads are made from cellulose, a natural polymer found in plants. Scientists dissolve the cellulose and reform it into tiny droplets that form microbeads. The beads are robust enough to remain stable in a bodywash, but can be broken down into simple sugars by microbes at a sewage treatment plant.

The work was funded by the Engineering and Physical Sciences Research Council (EPSRC). The team have received follow-on funding from UKRI to develop their research and have formed a spin-out company called Naturbeads to bring the research to market.

One bioplastic that has been touted as a replacement for PET in plastic bottles is polyethylene furanoate or PEF. This 100% recyclable polymer is produced using sugars derived from plants.

However, before PEF can be produced at commercial scale, scientists need to know more about how the material will perform.

Researchers used the ISIS Neutron and Muon Source beam research facility to study the properties of PEF on the atomic scale. This is at STFC’s Rutherford Appleton Laboratory.

The findings revealed that PEF has enhanced barrier properties compared to PET. This means it could prolong the shelf life of packaged products.

With support from Innovate UK, British startup Notpla is developing waste-free, compostable and, in some cases, edible packaging that biodegrades naturally in the environment or in landfill in four to six weeks.

The company’s core product, Ooho, a ‘flexible packaging for liquid’ made predominantly from seaweed extract (Forbes), could be used in everything from water bottles and running event drinks to sauce sachets.

In 2019 the seaweed pouches were handed out to runners in the London Marathon, preventing the use of hundreds of thousands of plastic bottles.

Bioplastics could also be made from lignin, a structural material found in plants and a by-product of the paper pulp industry. Waste lignin is usually burned as fuel, as it is notoriously difficult to break down into useful chemicals.

However that is set to change, thanks to work by Professor Timothy Bugg at the University of Warwick. Bugg’s research identified a bacterial enzyme which breaks down lignin. The work was funded by BBSRC. It led to a collaboration with Biome Bioplastics, one of the UK’s leading bioplastic developers, to turn the extracted chemicals into bioplastics.

Tree shelters are widely used by the forestry industry to protect young trees and hedges from predation by animals. However, most tree shelters are made from oil-based and non-biodegradable plastics and are not collected at the end of their life.

The Innovate UK grant will allow Biome to develop and manufacture prototypes of a novel bio-based, biodegradable tree shelter which will break down naturally into the environment at the end of its life.

Scientists at the University of Cambridge are also developing food packaging from naturally derived sources, such as wood and plants.

Led by Professor James Elliott, The Smart Sustainable Plastic Packaging from Plants (S2UPPlant) project aims to create new bioplastics that are stronger or offer better protection than those traditionally on offer. This will reduce the volume of plastic packing needed to keep food fresh.

To engineer the new bioplastics, scientists plan to tweak the genetics of plants, or blend natural materials together with additives from food or agricultural waste.

The project is funded under the UK Research and Innovation Smart Sustainable Plastic Packaging Challenge (SSPP), which aims to establish the UK as a major innovator in developing sustainable plastic packaging by 2025.

Imagine if instead of escaping into the atmosphere, CO2 from power plants was used to create new plastics. This is the goal of Imperial College London spin-out company Econic Technologies.

Usually, large amounts of energy are needed to transform CO2 into other useful chemicals. However, Econic has developed catalysts that significantly reduce the energy required for these reactions to occur. Their aim to achieve 30% market adoption by 2026 would mean around 3.5 million tons/annum fewer CO2 emissions. This is equivalent to taking more than 2 million cars off the road every year.

The company was founded on research by Professor Charlotte Williams, Professor of Inorganic Chemistry at the University of Oxford. It was funded by EPSRC.

These are just some of the solutions that researchers and innovators are looking at to review our use of plastics.

Read more about the plastic paradox.