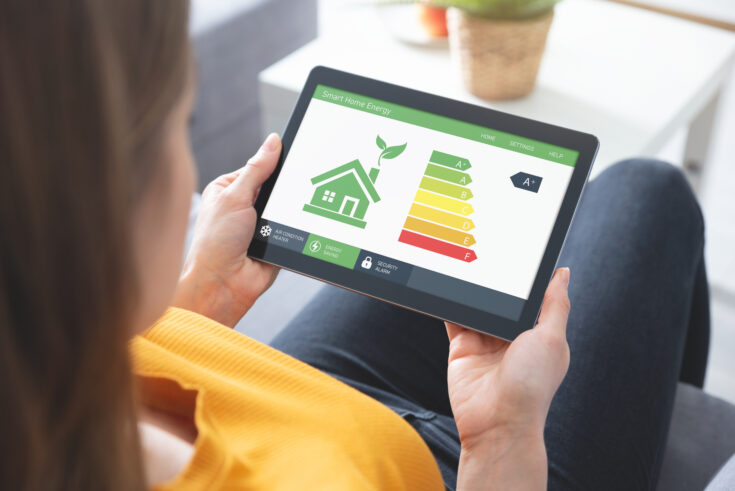 Entrepreneurs up and down the country are coming up with ingenious ways to heat our homes without polluting the planet.

Did you know that 19% of the UK’s greenhouse gas emissions come from warming up the places we live and work? Three-quarters of this is down to heating domestic buildings.

It’s not just heating that’s a problem. With the UK set to experience hotter summers in the future, the carbon cost of cooling buildings will continue to grow.

As 6 October is Energy Efficiency Day, we take a look at some of the ingenious low-carbon innovations and inventions currently under development.

How efficient is my home anyway?

Most homes in the UK were built before the concept of building regulations even existed. Of our approximately 27 million homes, as many as 25 million have been built to standards that we would now say are insufficient.

All this means that we have to spend more energy to warm up our houses in the winter and cool them in the summer.

Whether it is fitting new double glazing or loft insulation, improvements can be made. But the absolute first step is knowing how efficient your home currently is.

The energy efficiency of a building is currently expressed as an energy performance certificate (EPC). Yet EPCs don’t provide a full picture of how well a building holds its heat. Most are based on basic design plans of the building and a visual inspection.

A new app developed by Electric Pocket, a Welsh software company, is set to change this.

The HEAT3D app uses infrared thermal imaging to measure the energy performance of a building.

It was originally developed to help search for people lost at sea and measures the rate of heat flow through walls, floors and roofs.

But unlike other measurement techniques, it assesses the entire wall not just a single point.

The results are then presented as a 3D visual image that developers can use to improve energy loss and make buildings more efficient.

As well as improved accuracy, the HEAT3D app costs approximately £400. In comparison, normal infrared equipment can cost as much as £4,000.

The app is also much quicker. An entire building can be scanned in just two hours rather than several days.

The team was funded by UK Research and Innovation’s (UKRI) Transforming Construction Challenge, to test HEAT3D in the unique Energy House facility at Salford University, the only fully climate-controlled research facility in the world.

Whether it is heating our radiators or running a hot bath, heating water accounts for a lot of home energy use.

Conventional hot water tanks heat all the water in the tank irrespective of how much hot water is required. This wastes energy and results in unnecessarily long heating times.

However a new ‘smart’ water tank developed by researchers at the University of Oxford only heats the water you need, saving up to 20% on hot water bills.

The tank is the brainchild of University of Oxford researchers Pete Armstrong and Ren Kang. It was originally designed as a solution to a particular problem facing the UK’s energy sector.

What problem you ask?

As more and more of the UK’s energy needs are met by renewables, the supply of power into the national grid is becoming more variable. On really sunny or windy days there can be too much electricity for the grid to manage.

The flip side of the coin is that when consumer demand is high, there may not be enough energy from renewables to meet that demand.

Armstrong and Kang designed their smart hot water tank to act like a hot water ‘battery’ and store excess energy generated from renewables.

However, the tank could also be used by everyday people in their own homes.

It contains an onboard smart controller that connects the tank to the internet. This allows users to control their hot water through an app, set schedules and track their consumption and costs.

The tank also uses artificial intelligence (AI) to learn and predict at what times of day the user will need hot water, automatically adjusting the schedule as required.

The duo have formed the company Mixergy to market their invention, and have since received funding from Innovate UK to develop it.

Another project which aims to tackle the problem of intermittent energy supply from renewables is Green Smart Community Integrated Energy Systems (GreenSCIES).

It aims to transform homes and businesses into sustainable energy districts.

So far pilot schemes are ongoing in:

In each area, renewable and low-carbon energy from different sources is fed into a smart energy grid.

The grid uses the latest AI technology to calculate what energy is needed and at what times. It can then direct that energy to where it is needed most or store it if demand is low. This means energy generated in one building could power another building depending on local demand.

Every town is different

Each town will harness energy from different sources. For example, in Islington researchers are tapping into waste heat from the London Underground network and local data centres.

In Sheffield, GreenSCIES hopes to capture heat from underground mine water, whereas in Sandwell it will take advantage of the canal network.

If rolled out nationally, the project, which is funded by UKRI’s Prospering from the Energy Revolution Challenge, could make our cities much more energy efficient.

However, it would also reduce local air pollution and lead to lower energy bills for the consumer.

Imagine if a building could create, harvest and share its own clean energy.

A pioneering project in South Wales has done just that. Now the technique is set for wider roll-out.

The Active Classroom was designed and built by the SPECIFIC Innovation and Knowledge Centre at Swansea University.

The classroom, named Project of the Year by the Royal Institution of Chartered Surveyors (RICS) Wales, took just eight months to build and uses a mix of technologies to create as much energy output as possible.

The building is the UK’s first energy-positive classroom. In its first year it generated more than one and a half times the energy it consumed.

Professor David Worsley from Swansea University, who is leading the project, said:

The idea that a building has to consume power to survive is a bit 20th century. We can generate up to 50% more power from a building than it uses.

The technology, which is co-funded by the Engineering and Physical Sciences Research Council (EPSRC) and Innovate UK, has recently been integrated into a 16-home development in Neath, in partnership with social housing provider Pobl Group.

The team have also constructed an active office, which opened in June 2018. The office accommodates 30 members of staff and can share solar energy with the neighbouring active classroom.

In its first year, the active office reduced energy use in the building by 12%. Operational costs were also 43% less than a standard office of the same size.

These aren’t the only initiatives under development. Recently UKRI announced 11 projects which will transform how our buildings are heated and cooled.

They include the Geothermal Energy from Mines and Solar-Geothermal heat (GEMS) project led by Durham University.

The project will explore whether water in flooded, abandoned mines could be used as a low-carbon, geothermal source of heat.

Another project, led by Imperial College London, will determine whether thermal energy storage technology could be used in UK buildings to pump water underground and store it in a porous rock mass, called an aquifer.

All these projects will greatly reduce the energy required to heat and cool buildings.